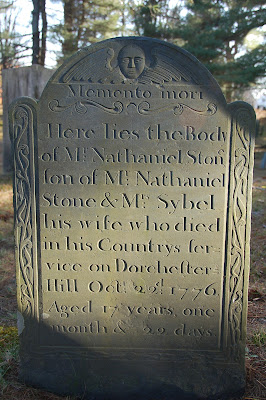 I should have posted this one on Wednesday, but I just didn't think of it. Sorry for the terrible picture quality. I'm sure that I will be back in Groton soon and will try to do a better job.

his wife who died

in his Countrys ser

Nathaniel Stone's gravestone would seem to indicate that he died while occupying Dorchester Heights during the siege of Boston. Yet, the dates are a little fishy. After the British abandoned Boston in March of 1776, there was little reason to continue occupying the heights and Washington's army spent the summer of 1776 moving toward New York. At the end of October, they were engaged in the Battle of White Plains.

I am left wondering whether the date might be mistaken or whether young Nathaniel, just a few weeks past his 17th birthday, was part of a militia guard left behind to guard Boston when Washington pulled his troops out.

carved by the Park family