101 Ways, Part 110: Vanquished the World and Relinquished It 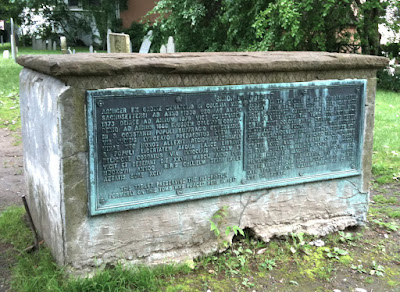 Simon Bradstreet's tomb in Salem bears a copper plaque erected in 1917 to replace the inscription that was wearing away. I have not preserved the capitalization from the plaque because I'm not sure that it is original to the inscription. Also, it's annoying to type 200 words in all caps. I have formatted the epitaph in a way that makes sense to me.

In the Senate of the Massachusetts Colony

then Lieutenant Governor to the year 1679,

Governor of the same Colony

by the general and determined vote of the people.

He was a man endowed with keen judgment

whom neither threats nor honors could sway.

He weighed the authority of the King

and the Liberty of the People

In Religion devout and upright in his ways,

he vanquished the world and relinquished it

on the XXVIIth day of March

in the year of our Lord MDCXCVII,

and in the IXth year of King William Third,

and of his life the XCIVth.

Posted by Caitlin GD Hopkins at 8:21 AM

It's interesting to contrast how old Simon was described in that official record of his life with how Anne Bradstreet described him:

TO MY DEAR AND LOVING HUSBAND

If ever two were one, then surely we.
If ever man were loved by wife, then thee;
If ever wife was happy in a man,
Compare with me, ye women, if you can.
I prize thy love more than whole mines of gold
Or all the riches that the East doth hold.
My love is such that rivers cannot quench,
Nor ought but love from thee, give recompense.
Thy love is such I can no way repay,
The heavens reward thee manifold, I pray.
Then while we live, in love let's so persevere
That when we live no more, we may live ever.