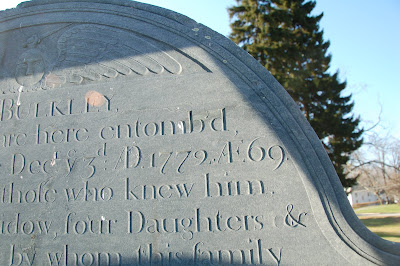 I found a mystery in Groton, MA last weekend. See what you can make of this epitaph: 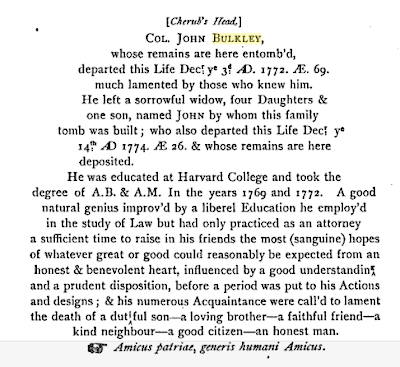 Usually, I would interpret the "he" of "he was educated at Harvard College" as referring back to Col. John Bulkley, but that cannot be. He can't have graduated from Harvard in 1769 and died in 1772 at age 69. I've looked through Sibley's Harvard Grads and the oldest students were in their early 20s.

I can only assume that the second half of the epitaph refers to the younger John Bulkley (b. 1749), who was indeed a member of Harvard's class of 1769. This makes sense — the second half clearly eulogizes a young man.

It's strange, though. The Park family would have known the Bulkleys, so perhaps this epitaph was not confusing to them, but it departs rather significantly from the usual pattern of epitaphs. If there is a verse or eulogy beneath the vital information, it is almost always dedicated to the principal honoree. I've never seen anything like this one before.

Posted by Caitlin GD Hopkins at 8:10 AM

the way i read that, it sounds like john jr (who built the monument) was sad about his fathers passing but really wanted to fount his own achievements as well...just a thought!

I take it that the Parks created this marker for the Bulkleys. It looks to me like the colonel died, and his son as oldest male of the family commissioned the tomb but died before the marker was complete. In their grief as the loss of such a young man, the Bullkley women memorialized the younger man on the marker originally commissioned for the older.

There is a Sibley’s volume for the class of 1769 which could contain more useful gossip.