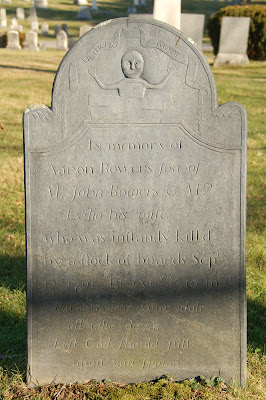 Yesterday, I wrote about Aaron's brother, John, who drowned in 1776 at the age of three. Aaron was born many years after his parents lost their first son and also died in an accident as a toddler. The verse at the end of the epitaph bears witness to his parents' ongoing grief.

by a stock of boards Sept

Lest God should still

Posted by Caitlin GD Hopkins at 7:35 AM