Over the past few weeks, I've been compiling a database based on Benjamin Drew's transcriptions of Plymouth epitaphs. Hopefully, when I'm done, I will be able to quantify some of the patterns that I have observed anecdotally.

I am nowhere near done with this work, but I took a little break today to run some early statistics. One of the patterns I noticed as I was entering the data was that more people seemed to die in the autumn than in the summer. A graph of the month of death for the first 1,400 individuals in my database showed that there was a noticeable pattern: 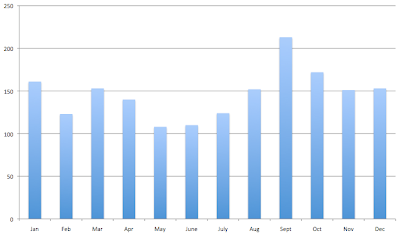 There seems to have been a dip in the death rate during the late spring and summer and a peak in the early autumn. I will have to do more detailed analysis when I am done entering all of the data (only 1,500 gravestones to go!). After seeing this overall pattern, I will want to break the death months down by age, decade, gender, etc. I suspect that the month has less of an effect on babies who die in the first month after birth and adults ages 15-50, but may have a pronounced influence on those most susceptible to epidemics: young children (age 2 months-5 years) and the elderly.

This is the sad evidence of the August-September epidemic cycle. I did a fairly exhaustive study of this in Menotomy, Massachusetts in the 18th and early 19th centuries. The death toll skyrockets in those months due to epidemics. When you do your study you'll find that it's almost all child deaths in those months. It's heartbreaking. In 1802 and 1805 there were dysentery epidemics in eastern Massachusetts. In Menotomy in 1802, one family lost three children in two weeks. In 1805 a different family lost three children in 9 days. You can't help but cry your eyes out over it. Then in October, death rates go back to normal. Colonial and early Republic Americans dreaded the return of epidemic season each year, with good reason.