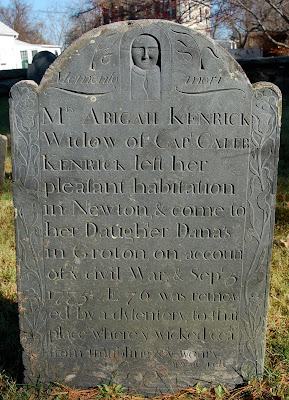 The late summer of 1775 was not kind to this family. One-year-old Stephen died on August 6th and his grandmother followed him on September 7th. Abigail Kenrick's gravestone (carved by the local Park family) blends the themes of sickness and war, and imagines heaven as a place where "ye wicked cease from troubling & ye weary are at rest."

in Newton & come to

ed by a dysentery to that

Posted by Caitlin GD Hopkins at 11:51 AM

The Groton burying ground was one of the first to have its inscriptions published with a high degree of scholarly accuracy, by Samuel Abbott Green in 1878. I have a connection with the place since nearly everyone in it is my cousin and quite a few are ancestors.

Green was incredibly prolific, and as a consequence more primary source material is available in print for Groton than for almost any other Massachusetts town. And he did this in his free time while serving as a physician, Civil War colonel, librarian of the Massachusetts Historical Society, and (yes) Mayor of Boston.

On my visit, I ran into Eleanor Gavazzi, the local caretaker. She gave me an impromptu tour and told me all about Samuel Abbot Green. Apparently, you can buy copies of the book of epitaphs from the Groton historical society for $10.