101 Ways, Part 116: Submitted to the Stroke of All Conquering Death

HERE lies Inter'd the Remains of

Being formed by ye GOD of ye Spirits of all

he was Called forth in Early life to the

mannagement of publick bussiness, and

acquitted himself with honour. he was

for Several years a member of ye General

Court, a Justice of ye peace; he was affable

in his Disposition when he saw any in

Distress he felt for them & was ready to

Releive them to the utmost of his power.

Beleiving a state of immortality, he endav

oured to secure happiness therein, by the

Exercise of Repentance towards GOD & faith

in Christ. after patiently Endureing a long

and distressing illness, he submitted to

the Stroke of all Conquering death 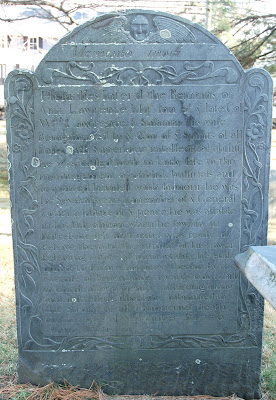 Posted by Caitlin GD Hopkins at 7:54 AM