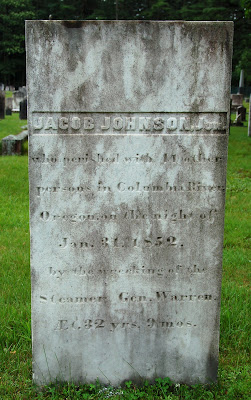 Now that I've gone beyond 101, I feel that I can include entries that didn't make the cut the first time around. This one was too close to #21: Perished in a Storm.

who perished with 41 other

Oregon on the night of

by the wrecking of the

The General Warren ran aground in the Graveyard of the Pacific — the treacherous coast between Tilamook Bay and Vancouver Island. The captain sent a boat for help, but by the time rescuers arrived, 42 people, including Jacob Johnson of Brunswick, Maine, were dead. Some of the bodies were recovered, but I have not found any evidence that Johnson's was among them.
Posted by Caitlin GD Hopkins at 8:02 AM