Yesterday, I argued that Pompe Stevens and Zingo Stevens were two different men.

Today, I will examine claims that Zingo Stevens was a master stonecarver and that he carved the gravestones dedicated to his three wives. At this point in my investigation, I believe that it is very likely that Stevens did some stonecarving or, at the very least, assisted in the production of gravestones by shaping, smoothing, transporting, or erecting gravestones. His will identifies Stevens as a "bricklayer" and his involvement in a 1779 suit with Gabriel Allen, the Providence-based stonecutter, indicates that he was almost certainly involved in the business in some capacity. Still, I have not seen evidence that suggests that Zingo Stevens was an accomplished master carver who carved many stones for Newport's Africans and African Americans.

The uncritical attribution of several African-American gravestones to the conflated Pompe/Zingo carver is the result of researchers’ unfamiliarity with gravestones and the methodology of carver attribution. After concluding (erroneously) that Pompe and Zingo were one and the same, thus establishing that Zingo was a stonecarver who worked “under the name ‘Pompe Stevens’,” many have supposed that Zingo Stevens must have carved the headstones dedicated to his three wives, Phyllis (d. 1773), Elizabeth (d. 1779), and Violet (d. 1803). If he carved those stones, they conjecture, he must have carved many others.


The problem is that these authors ignore material evidence and provide no documentary evidence to bolster their claims. The stones attributed to Zingo Stevens are clear examples of John Stevens III's work — many are even signed by him! I am perfectly willing to believe that Zingo Stevens' work as a stonecutter has gone unrecognized and is part of the body of work commonly attributed to John Stevens III, but anyone making that argument will have to present compelling evidence that contradicts or complicates the JSIII signatures and the ledger records that identify John, not Zingo, as the carver of specific stones.


This detailed marker is carved by Zingo Stevens, the African stone carver in Colonial Newport. He wold survive three wife's [sic] and personally carve each of their stones along with several of their children.

Although Stokes and Guzman Stokes do not provide any citations for this claim, many others have repeated it and expanded upon it. We know that Zingo Stevens belonged to John Stevens and that John Stevens carved gravestones, and can infer that Zingo probably helped John in the shop in some way. It's a big leap from that evidence to concluding that "the Lyndon family commissioned a stone from Zingo . . . Phyllis's [sic] image is carved on the stone dressed in traditional African dress." Yet, many have made the leap and kept on running.

After consulting with Ron Potvin, special collections librarian for the Newport Historical Society, Karen Lee Ziner wrote an article for the Providence Journal-Bulletin (available through Lexis-Nexis) in which she confidently claims that “many African-Americans became master stonecutters through apprenticeships at [the John Stevens] shop . . . Zingo Stevens, in fact, became the official gravestone cutter and engraver for African-Americans who were buried in [the NCBG].” Evidence?

One amateur taphophile has gone so far as to attribute the Dinah Wigneron stone (1772) to Zingo Stevens, despite the fact that the words, “Cut by John Stevens junr” are clearly visible at the bottom of the epitaph. Evidence?

Unfortunately, I have seen no documentary evidence to support these claims, and the material evidence flatly contradicts them.

No extant gravestone bears Zingo Stevens' signature, though there are at least 32 stones in God’s Little Acre signed by other carvers (29 by John Stevens III, 2 by Pompe Stevens, 1 by Henry Bull). The absence of signed gravestones does not prove that Zingo Stevens was not a carver, but several authors have claimed that he did indeed sign gravestones. These are the same people who claim that Pompe and Zingo Stevens were the same man, so all stones signed by Pompe are credited to Zingo.

Furthermore, the gravestones most often attributed to Zingo Stevens — those belonging to his three wives — are entirely consistent with the work of John Stevens III, the talented son of Zingo’s owner, whose signed and unsigned work is abundantly present in this section of the graveyard. The Phyllis [Lyndon] Stevens stone is a three-quarter effigy of mother and child, carved in John Stevens III’s signature style of lightly-inscribed, detailed portraiture. The Elizabeth Lyndon stone is a good example of his “Phoebe” style, and the lettering is consistent with his signed work.  By all current standards of carver attribution derived from formal analysis, both of these stones are almost certainly the work of John Stevens III.

Compare the Phyllis Stevens stone (1772) to the Pompe Brenton stone (1772), which is signed by John Stevens III:

Phyllis Stevens (1772) (note: This stone is made of poor quality slate and is badly deteriorated): 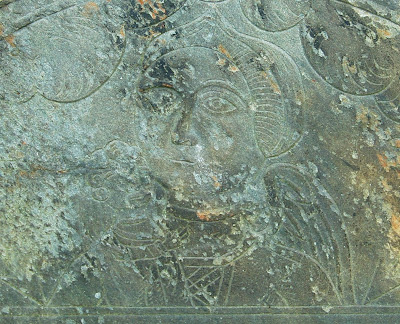 Claims that Zingo Stevens carved the stones in God's Little Acre are often accompanied by claims that his carvings exhibited African survivals. Some interpret Phillis' image as wearing "traditional African dress." Others see kente cloth and pectoral necklaces. Others claim that Zingo Stevens was responsible for the "distinctly African features" of some of the portrait stones. Yet, I am not convinced that Zingo Stevens carved any of these stones, especially those specifically signed by John Stevens III. If these motifs are present (some clearly are, others are debatable), what does it mean that John Stevens incorporated them into his work? Remember, he and his Christian colleagues are also responsible for those Hebrew epitaphs in the Touro cemetery.

Compare the Violet Hammond stone (1772)from God's Little Acre to the Sarah Rogers stone (1776) from the white section of the NCBG: 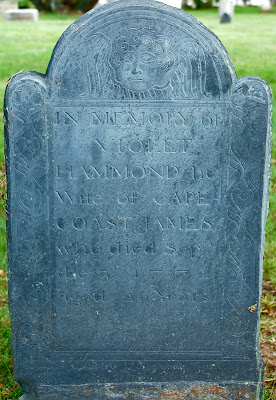 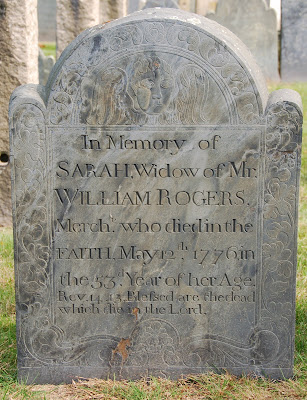 The letter forms are consistent (if more deeply gouged in the latter case), the soul effigies are similar, they both have the same four-petaled flower motif, and, most importantly, both are signed by John Stevens III. Since we know that JSIII was an active carver in this time period, it would take a strong argument with good documentation to overturn the assumption that he was primarily responsible for the carving of these stones. So why do some attribute the Hammond stone to Zingo Stevens?

Of course, a good argument might be made that Zingo Stevens’ unacknowledged work is so integral to the work commonly attributed to his owner’s son that any attribution to John III implicates Zingo, but no one has bothered to do the tedious formal analysis necessary to disentangle “the age-old dilemma of what to attribute to the master when a helper might be at work with him.”  The only attempt at formal analysis has come from Tashjian and Tashjian, who noted in passing that the Phyllis [Lyndon] Stevens effigy seems “stiff and even awkward” in comparison with John III’s other work, indicating that it “may have been carved by someone other than John Stevens III,” though any lack of grace could also be attributed to the unusually poor quality of the slate used for this stone.

Any historian is free to argue that Pompe Stevens and Zingo Stevens are the same man, just as anyone may argue that Zingo Stevens carved the gravestones of his wives and others in God’s Little Acre. Indeed, it is quite possible that he did carve some stones or parts of stones, or that he assisted in shaping, finishing, or erecting the finished products.  However, anyone wishing to make these claims must argue them, rather than presenting them to the unwary reader as established fact. The impulse toward celebrating a reclamation of African identity is understandable, as is the allure of imagining Zingo Stevens as the sole artist behind the most graceful and expensive gravestones dedicated to African Americans in Newport. Yet, in embracing these suppositions uncritically, those who make these two errors substitute a simple, triumphant story of resistance and African survivals for the more problematic tale of collaboration and uneasy intimacy that emerges from the available evidence. Worst of all, by focusing their attention on Zingo and the misattributed stones, they overlook the very real, identifiable, and important work of Pompe Stevens.
Posted by Caitlin GD Hopkins at 7:55 AM

Very good article brother. I was just at the graveyard yesterday examining some of the headstones. I wanted to ask you this: Is it possible that Zingo Carved the stones, and was not given any credit for it? Of course, we would need some substantial documenation to back up this claim, but it was common back then for whites to lay claim over black work, labor and invention. Also, it seemed as if the stone was the cheapest quality stone that one could buy (slave markers), compared to all of the other ones. Using cheap material and taking credit for work that was wasnt yours is not too far fetched...

Yes, this is certainly possible. Please see my extended paper on this subject.