The Onomastic Choices of Martha and Samuel T. Sappington

While working with the census the other day, I came across the Sappington family of Columbus, Mississippi. First of all, +5 for a great last name.

Martha and Samuel T. Sappington were endowed with fertile minds as well as fertile loins. Between 1838 and 1860, they had at least 8 children. While many modern parents save the flights of fancy for their daughters, the Sappingtons gave their sons matched names:

Devilla, b. 1839
Voltaire, b. 1846
Rousseau, b. 1851
Hume, b. 1853
Lucifer, b. 1859
We've seen this before with the Shattuck family (sons Africa, America, Asia, and Europe) and I'll be on the lookout for more examples. I am acquainted with a family with matched-name daughters (Ariel, Belle, Cinderella, and Aurora) and now I can tell them that matched sets are nothing new in American naming history.

Here's the page from the 1860 Census (little Lucifer is on the next page): 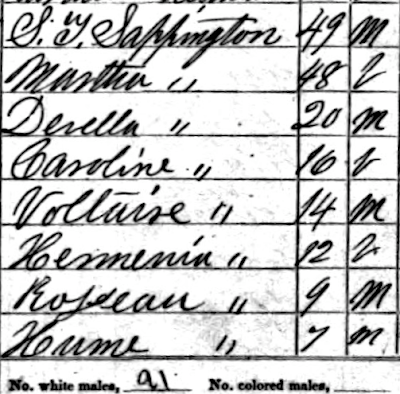 I wonder if there were any children between Hume (b. 1853) and Lucifer (b. 1859) who did not survive. What names might be missing?

Does anyone with a better grasp of the history of philosophy know who "Devilla" might be? Or is the inclusion of "Devilla" and "Lucifer" a comment on what the Sappingtons thought of European philosophers?

Voltaire and Devilla Sappington both served in Co. K (the Columbus Rifles) of the 14th Mississippi Infantry (C.S.A) during the Civil War.
Posted by Caitlin GD Hopkins at 8:54 AM

What a family! I wondered if "Devilla" might be little-devil -- but perhaps there is a De Villa somewhere who was meant.

I have an ancestor named James Ozro Pratt, and I had always thought "Ozro" must have been a one-off thing in his family. Then I discovered that there were hundreds of little boys named Ozro during a narrow period in the mid 1800s. As far as I can tell (without serious investigation) this can be traced to The Columbian Orator, one of the most popular schoolbooks of the period, which included a playlet called "Slaves in Barbary" that in turn had a character named Ozro.

Sometimes we think fads for naming children after the latest celebrity are a modern thing -- not so, I suspect.

Absolutely. It's easy to notice a new name like "Madison" from Splash or "Nevaeh" from that Christian rock guy (name escapes me), but easy to forget celebrity/trendy names of the past.

In addition to the presidential name spikes, there are lots of popularity spikes in names from novels. Clara Barton's full name was "Clarissa Harlowe Barton" after the heroine of Clarissa. "Evangeline" as a name was invented by Longfellow in 1847 - there are fewer than 10 Evangelines in the 1850 census, but hundreds in the 1860 census (probably helped along by cousin Harriet's use of the name in Uncle Tom's Cabin.)

I just came across a 1790 work by John Adams called Discourses on Davila. Is this where that name comes from?

I suppose it could be. The scribe seems to be pretty good at spelling obscure names, though, and it looks clearly like Devella (I think now more than Devilla, since he dots his i's pretty regularly). Adams' Davila is an obscure historian:

I see there's another obscure philosopher who might be a match:

Thanks for the history!
Will Sappington