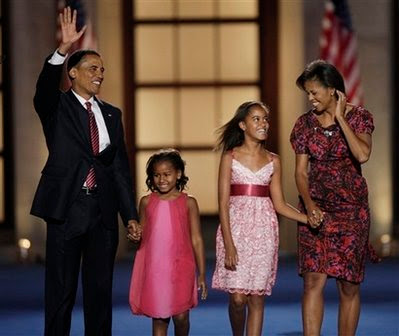 In honor of our new president, I took a look through the census records and found lots of little Americans who have been named for our presidents. Unsurprisingly, they often travel in sets.

Part VII: Ford — Bush*
*After Hoover, it gets a little tricky because the post-1930 census records are not available yet. Ancestry makes some state birth records available, so I have used these, along with some marriage records, to find presidential names after Hoover. Unfortunately, the lack of census records makes it difficult to find matched sets of siblings.
Posted by Caitlin GD Hopkins at 8:20 PM

Did you tell me about this, or did I pick it up somewhere else?

You have to have Java enabled in your browser, but it's exceedingly cool. Just type in Woodrow or Franklin to see the presidential effect. (It only covers the 20th century.)

Yeah, I love that thing. It's so cool!

One pattern it reveals is the popularity of different initial sounds in different decades. Try typing in strong consonants like D, P, R, or S, and you'll see a bell curve centered on mid-century. Vowels produce the opposite effect — A, E, I, O all have bowl-shaped curves.

Excellent topic! I have witnessed this in my own family; my great-great grandfather was George Washington Kelley. We theorize that he may have been second generation (born 1862)

great idea. my wife wasn't going for the name Abraham Lincoln Katz... but such is life.