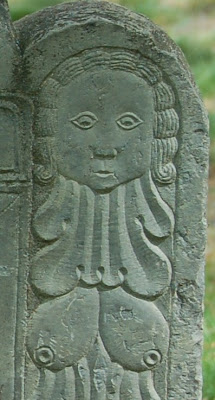 I have written about breast/fig/gourd motifs before, but the Marblehead examples are not the most literal depictions of vessels of the "divine milk."

The old graveyard next to the Unitarian Universalist church in Harvard Square holds several better examples of this interesting type of imagery. Unlike many of the Marblehead gourds, the Cambridge figures are round and full. Often, the presence of a lifelike face on the finial reinforces the images' association with breasts. The border of the John Wattson stone (1711, image at right) is particularly explicit. It takes only a little imagination to interpret the design under the face as a cravat with breasts protruding underneath.

While these objects may be interpreted as gourds or figs, Ludwig makes a strong case for the presence of both literal and metaphorical breasts in Puritan iconography. According to Jonathan Edwards, "Milk represents the word of God from the breasts of the church . . . Milk by its whiteness represents the purity of the word of God; it fitly represents the word because of its sweetness and nourishing nature" (Ludwig, 155). Then, there is that naughty Edward Taylor poem . . . 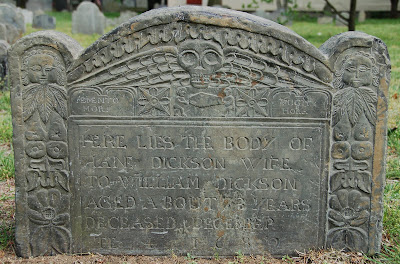 The Jane Dickson stone (1689) features two styles of breasts/figs/gourds, both under finial faces. These are particularly interesting because, instead of the ministerial cravats of the John Wattson stone, these heads wear collars of leaves, evocative of contemporary representations of Native Americans. The pendulous ovals hanging down from the collars look very like breasts, as do the circles below them. The bumpy shapes near the bottom look more like gourds to me.

There are plenty of other examples, and it would be tiresome to list them all. Just rest assured that if you visit the old Cambridge cemetery, you'll see a whole lot of Puritan boobs. 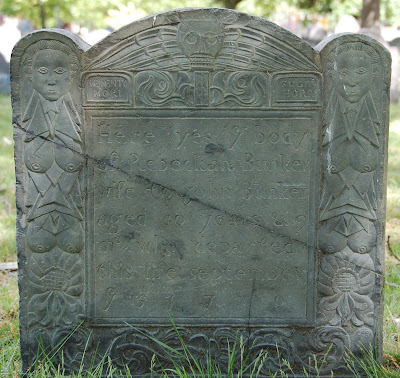