While Union veterans in attendance at the 1913 reunion could retrace their regiments’ steps by visiting the granite and bronze monuments that they themselves had erected, Confederate veterans encountered a very different monumental landscape. Fifty years after the battle, the Confederate position was marked primarily by several dozen bronze plaques and mounted cannon that had been placed by the War Department in the decade leading up to the reunion. These plaques, which are “written in precise, elevated language using military terminology removed from the immediacy of emotion,” note details such as the type of guns in each battery, the total number of rounds expended, and the number of men killed, but they are informational markers, not monuments. The Southerners who visited the battlefield in 1913 understood that bald facts could never tell the history of the battle in the way they wanted to tell it, and in the years following the great reunion, they set out to construct their own monumental landscape.

In contrast with the “chaste” Union monuments, the Confederate monuments at Gettysburg are visceral, heroic, and emotional. Whereas the bronze statues that adorn Union memorials depict impeccably dressed officers and men with calm, composed countenances, the ragged, suffering titans of the Confederacy are alternately grim and enraged. The style and form of these monuments tend to emphasize three main points: the heroism of ordinary soldiers, their profound physical suffering, and the nobility of their cause.

By sculpting Confederate soldiers in heroic proportions and with allusions to classical ideal body types, monument designers elevated them to the status of demigods or, at least classical heroes. By emphasizing the physicality of the Confederates’ naked and injured bodies, sculptors appealed to visitors’ empathy and made the story about soldiers’ suffering rather than slaves’. By portraying Confederate soldiers as blameless, suffering heroes, these monuments implicitly characterize the Confederate cause itself as worthy and sympathetic. Over the course of the 20th century, Confederate memorial sculpture at Gettysburg elaborated on these themes, presenting an emotional case for the Lost Cause to millions of Gettysburg visitors. 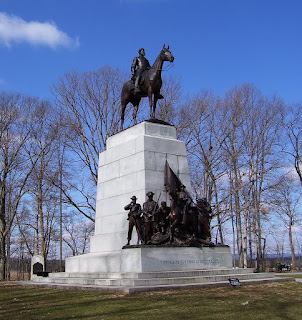 That Confederate state memorials would be stylistically different from Union monuments was apparent as soon as the Virginia monument was unveiled in 1917. Although it rivals the New York and Pennsylvania monuments in sheer size, the Virginia monument inverts some of those structures’ most important imagery (image at right via SOUTHERN HEART). Instead of crowning the memorial with an allegorical female figure, the Virginia monument commission chose to place an equestrian statue of Lee at the apex. Around the base of the shaft, where Pennsylvania honors eight eminent political and military leaders, Virginia chose to memorialize six ordinary soldiers and a single officer, all in various states of action and distress. According to the plaque that accompanies the sculpture, these figures are meant to represent the types of men who fought for the South: “a professional man, a mechanic, an artist, a boy, a business man, a farmer, [and] a youth” (image below via A Spiritual Oddity). 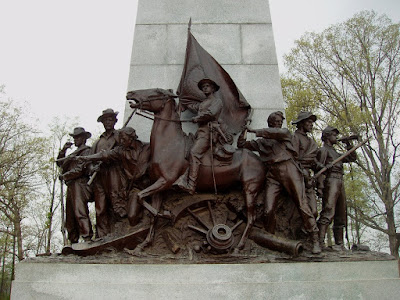 These men, whose open shirts reveal glimpses of bare chests and whose battered hats or bare heads enhance their rumpled aura, defend the state flag the center of the tableau with drawn pistols, swinging rifle butts, and determined scowls. The officer who carries the flag looks placid enough, but his horse’s open mouth and terrified, rolling eyes attest to the battle that is no doubt raging around them. All of the figures stand atop the ruins of a demolished caisson, and their pedestal is littered with the debris of war, including a cannon, hats, canteens, and splintered branches. In contrast to the remote and overwhelming authority of the Pennsylvania monument, the Virginia monument brings the images of suffering, striving soldiers down to the visitor’s eye-level; there are even steps leading up to the statues so that observers can come face-to-face with the soldiers. Only Lee remains elevated, inaccessible, and idolized. This iteration highlights the heroism of ordinary soldiers, but the heroic themes are muted by the soldiers’ lifelike appearances and lack of injuries. 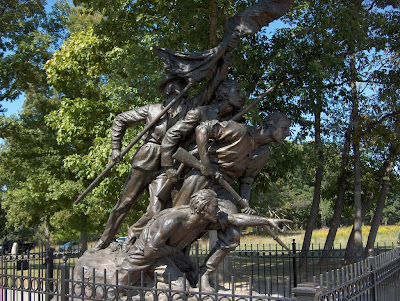 Subsequent Confederate memorialists continued to elaborate on the themes that were first expressed in the Virginia monument. In 1929, North Carolina veterans dedicated their own monument, designed by the eminent sculptor Gutzon Borglum. Borglum had recently completed his work on Stone Mountain in Georgia and had taken time out of his work at Mount Rushmore to cast the North Carolina monument. The five colossal soldiers of the North Carolina monument are exaggerated versions of their Virginia counterparts (image above left via justmecpb). While the Virginia soldiers show a few inches of bare chest, one North Carolinian’s garment is torn away completely, revealing the rippling muscles of his chest and upper arm, while his comrades’ rolled-up sleeves lay bare bulging veins and tense forearms. No steps are needed to bring the visitor into close contact with the soldiers’ pained visages because the sculpture’s plinth is less than a foot high. 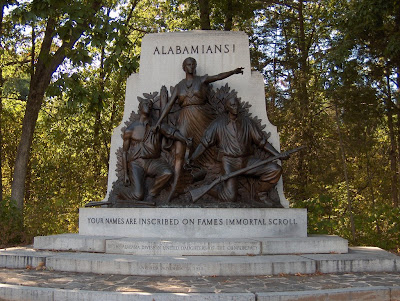 Similarly, the Alabama monument (1933) features two bedraggled soldiers kneeling on a very low plinth (image at right via justmecpb). The half-naked younger man appears to be wounded, and is handing his cartridge box to a comrade while a female allegorical figure holds the former back and urges on the latter. In both the North Carolina and Alabama monuments, the sculptural soldiers’ obvious suffering and partial nudity suggest their heroic qualities.

The Confederate tragic/heroic style reached its pinnacle in the Louisiana and Mississippi monuments, which were dedicated in 1972 and 1973, respectively. Like the earlier state monuments, these sculptures encourage close physical contact between the viewer and the figure, but they transform the Virginian, North Carolinian, and Alabamian allusions to classical tragedy into full-blown pathos. The Louisiana monument features a handsome, clean-shaven youth who lies dead at the feet of a female allegory who is variously identified as the “Spirit of the Confederacy” and St. Barbara, patron saint of artillery (image below via ChrisOD). The young soldier’s elongated feet protrude from his worn and tattered shoes and he clutches the Army of Northern Virginia’s battle flag to his body with both hands: one clasped over his heart and the other stretched protectively over his groin. 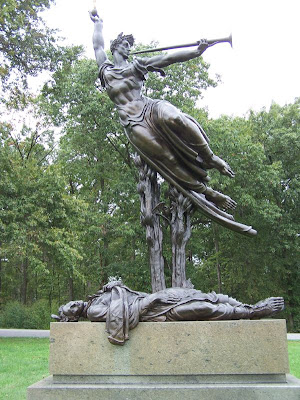 The sculptural portion of the Mississippi monument also depicts a fallen soldier draped in the battle flag and protected by a second figure, in this case, the man’s snarling, rifle butt–wielding comrade (image below via SchumiCampione). Barefoot and bareheaded as his cap falls away, the second Mississippian defends both his fellow’s body and the colors with his clubbed rifle, the bursting sinews of his arm, and a still-sheathed bowie knife. As in the Louisiana sculpture, the focus is on the soldiers’ physicality: the Mississippian’s gossamer trousers display every ripple of muscle in his massive thighs, the dead Louisianan’s face is at the visitor’s eye-level, and all three subjects’ oversized hands and feet are terribly exposed and vulnerable. While the stylistic emphasis on their physical pain and bravery leave little doubt that these Confederates were heroes, the Mississippi monument’s inscription makes the nobility of their cause explicit, declaring, “ON THIS GROUND OUR BRAVE SIRES FOUGHT FOR THEIR RIGHTEOUS CAUSE.” 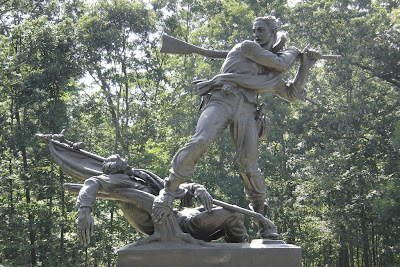 Since 1993, four additional statues of Confederate soldiers have been dedicated at Gettysburg: the “Friend to Friend” monument dedicated to both Union and Confederate Freemasons (1993 - image below right via Sixty4Graphics), the Maryland state memorial (1994), an equestrian statue of General James Longstreet (1998), and the 11th Mississippi regimental monument (2000). 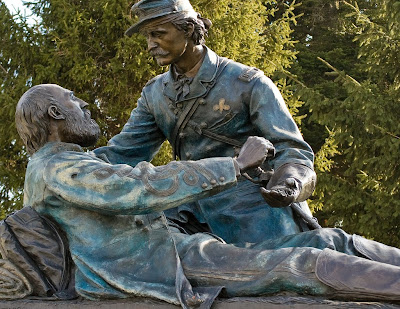 All four of these monuments develop the themes of heroism and suffering, but amend earlier monuments’ endorsements of the Confederate cause, not by claiming that that cause was ignoble, but by arguing that it was irrelevant. These recent depictions of Confederates are primarily concerned with reconciliation, a theme that is most explicit in the Masonic and Maryland monuments, both of which feature unarmed soldiers from both armies giving aid and comfort to their enemies. None of the four monuments erected in the past fifteen years depicts an actively armed Confederate, preferring to memorialize flagbearers, wounded men, and generals, whose ceremonial weaponry remains sheathed. Not only are these soldiers not fighting to preserve slavery, they are not fighting at all. By erasing Confederate weapons, recent monuments preclude the possibility that there could have been any real difference between the Union and Confederate causes. In the most extreme act of erasure, the Maryland monument’s inscription proclaims,

MORE THAN 3,000 MARYLANDERS SERVED ON BOTH SIDES OF THE CONFLICT AT THE BATTLE OF GETTYSBURG . . . THIS MEMORIAL SYMBOLIZES THE AFTERMATH OF THAT BATTLE AND THE WAR. BROTHERS AGAIN. MARYLANDERS ALL. THE STATE OF MARYLAND PROUDLY HONORS ITS SONS WHO FOUGHT AT GETTYSBURG IN DEFENSE OF THE CAUSE THEY HELD SO DEAR.

In this telling, there is no difference between the causes because there is only one cause. 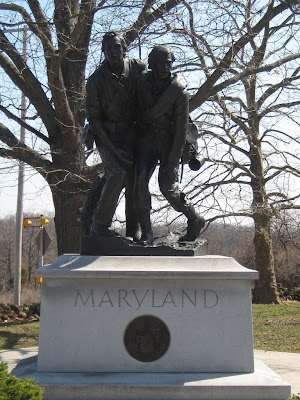 (Maryland Monument image via smokejmt.)
Every year, almost two million visitors, many of them children, experience the emotional appeal of the Confederate monuments at Gettysburg. The statues’ threefold focus on ordinary Confederate soldiers’ heroism, their wretched physical agony, and the worthiness of their cause presents a much more engaging and sympathetic argument than the aloof Victorian sculpture on the Union side. Although it is possible to trace the development of these stylistic elements over time, the permanence of monumental granite and bronze allows contemporary visitors to experience the full range of the pro-Confederate sculptural argument simultaneously. Without uttering a single word, the stylistic elements of these memorials influence visitors’ perceptions, encouraging them to identify with the human tragedy of the Southern soldier rather than the austere power of the Northern regiments whose formulaic monuments invite few emotional attachments.
Posted by Caitlin GD Hopkins at 6:00 PM

We are Different win or lose from the union, north of the Mason Dixon line.

I hope we will always remain different, Southern by the Grace of God!

Thank you for not using the big old erasure of the politically correct.
We had slaves, you cannot separate the black and white Southernors they are all the same. Southern to the Core.

I'm not really sure what any of that means.