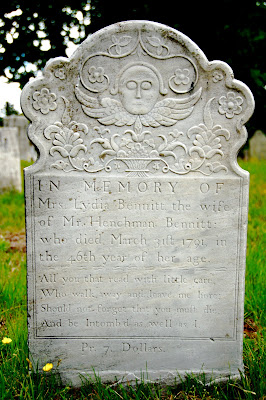 Yesterday, I took my little sister to the old burying ground in Columbia, CT. This is a sweet little graveyard, but it is neglected. There's lots of overgrown grass, which is actually something of a blessing, since lawnmowers do a lot of damage to gravestones.

The Lydia Bennitt stone (at right) is probably the most famous stone in the yard - Allan Ludwig uses it as an example of Zerubbabel Collins' later work in Graven Images: New England Stonecarving and its Symbols, 1650-1815. This gravestone is notable for several reasons: it's one of the few marble stones in the area (Collins sent it back to Connecticut after he moved to Vermont in 1778); it's beautiful and intricate; it displays the wonderful name Henchman Bennitt; and it has the price carved on it! I originally thought that the price was supposed to be hidden below ground level, but it is so close to the bottom line of the poem that I'm not entirely convinced. Also, I love the little wig on the soul effigy's head.

The Columbia graveyard slopes down away from the road, ending with a stone wall that marks the border with the woods. The gravestones are bunched close together near the road, but fewer are placed on the bottom of the slope. Very few are near the stone wall, of which these three are the most prominent: 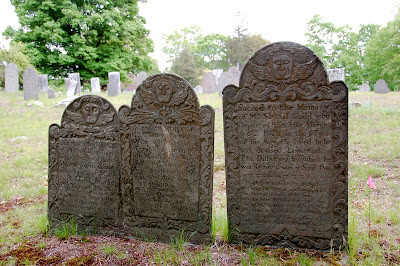 These three stones (honoring William Goger, John Fowler, and Samuel Guild) are notable because they commemorate men who died during the smallpox epidemic that hit the area in March of 1771. I don't know for sure, but I speculate that these men were buried at some distance from the other graves in order to contain their disease in a seldom-visited corner of the graveyard.

All three stones appear to be the work of Zerubbabel Collins or someone in his workshop. They are stylistically similar to the Lydia Bennitt stone, but are somewhat rougher in their details. The most interesting thing about them is that two of the three explicitly mention the cause of death, which is fairly unusual.

I think that these men were probably prominent members of the community. Two were in their 60s and age was generally venerated in colonial New England. Their gravestones are not as sophisticated as Lydia Bennitt's, but they are still large and elaborate. If it is true that Goger, Fowler, and Guild were rich or powerful, I wonder how many other smallpox victims are buried in that seemingly empty corner of the graveyard.

Visitors to Columbia's graveyard will also find the graves of Sarah Wheelock, wife of Eleazer Wheelock, and two of her infant sons.
Posted by Caitlin GD Hopkins at 2:56 PM