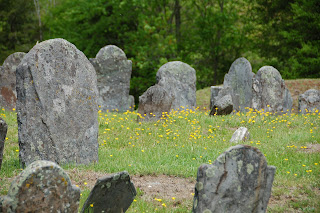 I went home to Connecticut earlier today to catch the matinee of my sister's school play: "Thoroughly Modern Millie." The less said about that, the better. 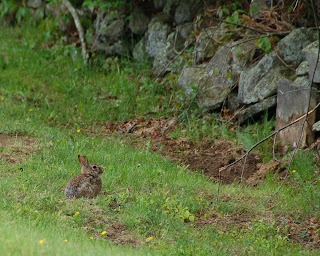 I had a little time to waste while my parents were out squiring grandparents to and fro, so I stopped by the Trumbull Burying Ground in Lebanon, CT. This has been one of my favorite graveyards ever since I can remember, so it was a little sad to see it in such bad shape. Even in the past ten years, the monuments have degraded significantly, and I was unable to find some of the specific stones I wanted to take pictures of. 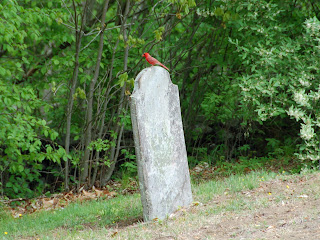 Part of the problem is that the stone used in northeastern Connecticut is of much poorer quality than that found in the Marblehead graveyards. Instead of dense slate, the local carvers used local granite full of mica or, even worse, red sandstone. The red stones are beautiful, but the material is so porous that water leaches in and then freezes, causing spalling, which is when a section of the stone flakes off. Here are some examples of pretty serious spalling: 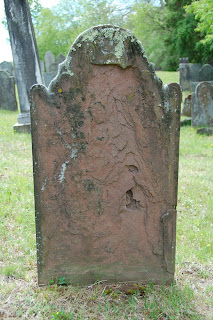 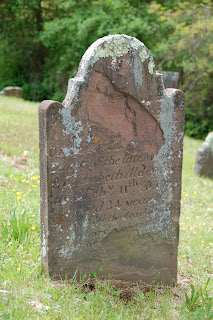 One thing that caught my attention was that there are several stones in Lebanon that refer to men as the husband of a woman. It is common for an early American epitaph to make reference to a woman's husband, but I'm not sure whether I've ever seen it the other way around before. I'll have to keep my eyes open for that.

This one's a little hard to read, but I promise that it says, "Here lies interred the Body of MISTAR JOHN WEBSTERS, who was the loveing consort of Mrs. Elizabeth Webster . . .": 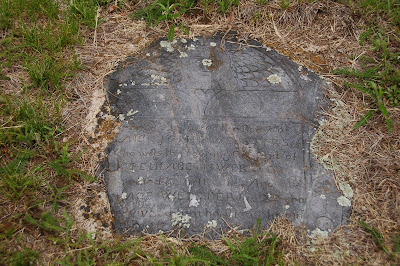 Here is another, which states that Mr. (Unreadable) Phelps was "ye husband of Mrs. Sarah Phelps." I know it's hard to read. If you click on it, the picture will get much bigger, which may help. 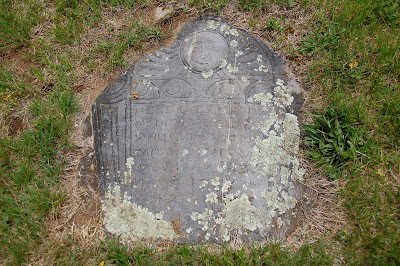 As you can see, these stones are in danger of eroding completely. Being buried might actually preserve them.

If you've ever seen another seventeenth- or eighteenth-century gravestone with "husband of" on it, please let me know.
Posted by Caitlin GD Hopkins at 9:22 PM