In contrast to both “push” and “pull” arguments, several recent authors have drawn attention to involuntary migration, which accounted for the vast majority of all transatlantic migration in the seventeenth and eighteenth centuries.* Although most involuntary migrants were enslaved Africans bound for the sugar islands, the exploration of coerced relocation contributes to the literature on Englishwomen’s migration through its discussion of the labor history of the American colonies. Since forced migration involved large-scale planning, studies of this phenomenon can illuminate elites’ understanding of the relative importance of male and female laborers to their colonial projects. 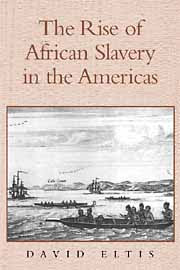 The author who most directly addresses the fundamental question of gender disparity in migration is David Eltis. In The Rise of African Slavery in the Americas (2000), Eltis attempts to explain why Europeans were willing to import enslaved African women but did not encourage European women to emigrate. He argues that white men were willing to accept African women as field workers who could contribute to the staple crop economy of the colonies, but that European women’s labor was neither profitable nor in demand in the colonies. English women were not coerced or coaxed into migrating because they were “never a significant part of the labor force of the export sectors of the Atlantic economies” (Eltis, 99). The idea that elite planners devising an ideal workforce preferred English men to English women is supported by the work of Robert C. Johnson, who found that when the Virginia Company sent vagrant children to their colony as servants, they chose to send three times as many boys as girls.**

Even if we accept Eltis’ supposition that “the work of women was closer to the core of the African economy than was its English counterpart,” his belief that women’s labor was not in demand in the colonies does not fit the evidence supplied by other authors (Eltis, 92). In addition to Carr and Walsh’s argument that white women were scarce, sought after, and highly valued in seventeenth-century Maryland, Kathleen Brown’s work on seventeenth-century Virginia demonstrates just how valuable white, female workers were to the planter economy.

In Good Wives, Nasty Wenches, and Anxious Patriarchs: Gender, Race, and Power in Colonial Virginia (1996), Brown contradicts many of Eltis’ key assumptions about the value of white women’s work by pointing out that tobacco production reached its peak only after women, “whose processing and commercial skills made possible both subsistence agriculture and internal markets,” reached demographic parity with men (Brown, 84). Where Eltis argues that “European settlers in the New World did not reshape European norms in family and sexual conduct,” Brown finds that colonial courts and legislatures spent a great deal of time passing and defending laws that struggled to impose ideal European gender relations on a populace that challenged them constantly (Eltis, 103). Where Eltis assumes that “demand for [English] women stemmed from their reproductive role,” and that “there was no economic demand to sustain the female component of transatlantic migration,” Brown argues that white women’s field labor was crucial to their husbands’ economic success because, unlike black women and all men, they were not taxed as potential field workers. This allowed white planters to profit from the field labor of their untithable wives and children while the law defined women as household laborers and ignored evidence that white women actually performed agricultural work (Eltis, 96; Brown, 121).

Brown is not explicitly concerned with transatlantic migration, but her compelling arguments about white women’s economic value in the colonies and English discourses of gender and social order provide essential background for further work on female migration.

Although Eltis makes several untenable assumptions about white women’s place in colonial economies, his focus on labor markets is essential to unraveling the causes of gender disparity among transatlantic migrants. In the face of insatiable demand in the American colonies and a surplus of unmarried women in England, arguments that attribute gender disparity principally to the laws of supply and demand fall flat. Since the economic explanations of labor demand that seem to explain male migration to the Americas cannot fully account for the lack of European female migration, future investigations must grapple with the influence of culture.

Though they take different routes to arrive at similar destinations, both Eltis and Brown agree: “culture-bound assumptions” have economic and political consequences, and no argument that ignores ideology can fully explain gender or race relations in early America.

*David Eltis finds that African slaves made up 61.3% of all migrants during the period 1640-1700 and 75.7% between 1700 and 1760. In addition, he estimates that 80% of all women and 90% of all children who crossed the Atlantic before 1800 were enslaved Africans. In addition to the coerced migration of Africans, many European prisoners were transported against their will. It is difficult to assess the number of European indentured servants who should be added to this tally, since some contracted their indentured willingly, while others may have been coerced. In any event, most transatlantic migrants did not travel of their own volition. David Eltis, The Rise of African Slavery in the Americas, (Cambridge: Cambridge University Press, 2000), 11, 97; Carr and Walsh, 542.
**Since the Virginia Company had a vast supply of vagrant children and paupers of all ages and both sexes at their disposal, their decision to send “seventy-five boys and twenty-four ‘wenches’” in 1619 seems to be calculated to meet the colony’s perceived labor needs. Robert C. Johnson, “The Transportation of Vagrant Children from London to Virginia, 1618-1622,” in Early Stuart Studies, ed. Howard S. Reinmuth, Jr., (Minneapolis: University of Minnesota Press, 1970), 140.
Posted by Caitlin GD Hopkins at 4:46 PM