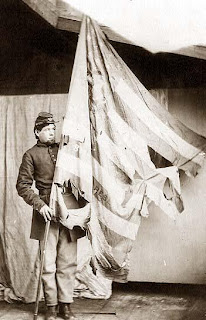 Today, I came across the most pompous Civil War song I've ever found, which is saying a lot. This song appeared in the Boston Evening Transcript on August 2, 1862.

I'm always fascinated by New Englanders' identification with the Old Testament Israelites, and this is evidence that it did not end in the 17th century. As much as we debate republicanism vs. liberalism, the fact is that many people in 18th and even 19th-century America placed themselves in a Biblical landscape.

"To Canaan" uses the Old Testament language fluently, but some of the implications are fairly disturbing if you carry the analogy far enough. For one thing, the song positions the Union armies as Jews during the Exodus, on their way to Canaan after being released from slavery in Egypt. What will they do when they get to Canaan? Well, in the Bible, they slaughter every man, woman, child, and animal they can find. That can't have been comforting to Southerners.

My favorite line is this pronouncement on the American flag:
"What God has woven in his loom let no man rend in twain!"
To Canaan!
(A Song of the Six Hundred Thousand)

Where are you going soldiers, with banner, gun and sword?
We're marching South to Canaan to battle for the Lord!
What captain leads your armies along the rebel coasts?
The Mighty One of Israel, His name is Lord of Hosts!
To Canaan, to Canaan, the Lord has led us forth,
To blow before the heathen walls the trumpets of the North.

What flag is this you carry along the sea and shore?
The same our grandsires lifted up, the same our fathers bore!
In many a battle's tempest it shed the crimson rain —
What God has woven in his loom, let no man rend in twain!
To Canaan, to Canaan, the Lord has led us forth,
To plant upon the rebel towers the banners of the North!

What troop is this that follows, all armed with picks and spades?
These are the swarthy bondsmen, the iron-skin brigades!
They'll pile up Freedom's breastwork, they'll scoop out rebels' graves;
Who then will be their owner and march them off for slaves?
To Canaan, to Canaan, the Lord has led us forth,
To strike upon the captive's chains the hammers of the North.

When Canaan's hosts are scattered and all her walls lie flat,
What follows next in order? The Lord will see to that!
We'll break the tyrant's sceptre, we'll build the people's throne,
When half the world is Freedom's, then all the world's our own!
To Canaan, to Canaan, the Lord has led us forth,
To sweep the rebel threshing-floors, a whirlwind from the North.
Posted by Caitlin GD Hopkins at 8:35 PM