When I visited Mount Auburn, I was surprised by the number of 19th-century stones that reused 17th- and 18th-century imagery. 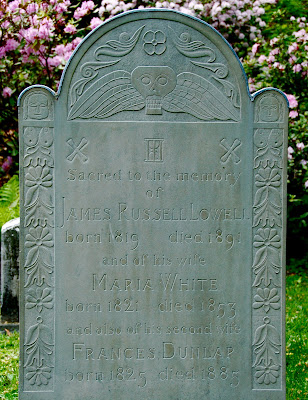 The most elaborate example of this trend is the James Russell Lowell/Maria White/Frances Dunlap stone (1891), which copies images from several different colonial-era stones. 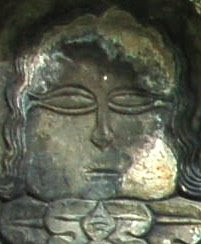 The faces on the finials resemble faces that appear on several Cambridge stones, including the Elizabeth Hastings stone (1702). The jowls, almond-shaped eyes, flowing hair, and thin nose all match. The death's head on the lunette is simplified, but is similar to the lunette design on the Jonathan Wyeth stone (1743).

While the flowers on the Wyeth stone are
5-petaled rather than 4-petaled, the shape of the skull and wings are similar to those on the Lowell lunette. Other design elements, such as the fig/gourd/breasts on the vertical borders, are common to many early Massachusetts gravestones. 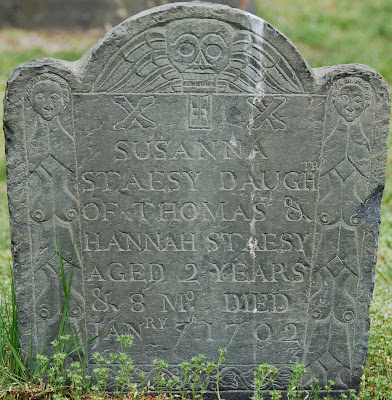 The crossed bones and hourglass are also common, and are often combined in Cambridge stones, such as the Susanna Staesy stone (1702).

As a professor at Harvard, Lowell would have passed by the Unitarian Universalist Church and its graveyard on a daily basis. The gravestones must have appealed to Lowell, whose interest in literature and history is well known.

I don't know why James Russell Lowell chose to have such an unusual gravestone carved for him, but I suspect it had something to do with establishing his authenticity as a genuine New Englander. In the late 19th century, as immigrants and industry changed the social and cultural dynamics of Boston, the old fashioned New Englandy-ness of the stones in the Unitarian graveyard must have appealed to Lowell as an expression of that dying culture. I'm just speculating here - someone who is more familiar with Lowell's work could probably offer a more informed interpretation. For now, I'm going to assume that regional/cultural pride or nostalgia played some role, but I'll have to investigate further.

There are a few other stones at Mount Auburn that preserve colonial motifs. Most are just tripartite slate stones with faux-colonial floral designs along the borders. Only a very few have colonial lunette designs, but those that do are beautiful. 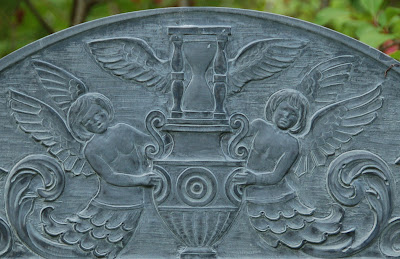 One of these is the Henry Howard Brown/Hannah Bangs Thayer stone (1941). The double mermaid appears on at least three stones in the Copp's Hill Burying Ground — the Michael Martyn stone (1682), the William Greenough stone (1693), and the John Briggs stone (c. 1690) — though none of these has the winged hourglass above the urn. There are also two double mermaid stones — Jacob Eliott (1693) and Benjamin Hill (1683) — at the Granary Burying Ground in Boston. The bulls-eye design on the urn is very similar to the concentric circles on the William Greenough stone. Ludwig attributes the 17th-century stones to the unnamed carver, "J.N." (Ludwig, 299). He calls the creatures Dagons and Nereids, but is unable to explain how they ended up on Puritan gravestones. I don't have any better guesses than he did. 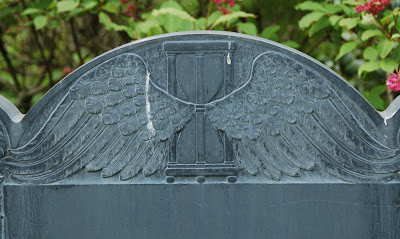 The other elaborate gravestone is the Thomas Earle White stone (1916), which features a winged hourglass. The winged hourglass isn't a very common design for a full lunette - it's usually a smaller design element, but there are some examples of larger hourglasses. The William Field stone (1772) in Providence has a full winged hourglass, but it is more primitive than the White stone. I'll have to keep my eyes open for a similar stone in Boston.
Posted by Caitlin GD Hopkins at 4:44 PM

Thanks for "Colonial Revival." Very interesting. I enjoy taking photos of unique older mausoleums, statues / monuments, and interesting headstones. I live in MA and would love to photo some earlier head stones (flight of time and morbidity symbols). If your interested I have photos of an old cemetery in Worcester, MA called Hope Cemetery. Very nice place.