This Republic of Suffering 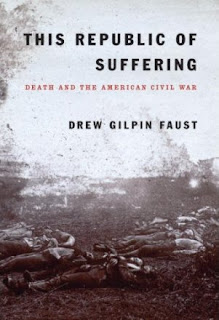 Today, I finished Drew Gilpin Faust's This Republic of Suffering: Death and the American Civil War (2007). I won't say I finished "reading" it because, technically, I listened to the audiobook, but that shouldn't matter. I like having nice, long audiobooks on my iPod as I walk around Cambridge — in the past few months, I've listened to The Killer Angels, Al Gore's The Assault on Reason, Simon Schama's A History of Britain, The Red Tent, The Ghost Map, Fred Anderson's The War that Made America, Uncle Tom's Cabin, and my weekly "This American Life" podcasts.

Many others have reviewed this book in recent months, and I won't rehash what they have said. I'll just say that I enjoyed this book well enough, though it wasn't life changing. I'm glad to see that a good book about 19th-century cultural history is so popular, even if that probably has more to do with Faust's position than her research skills and lucid writing.

I was also glad that the argument was Am-Civ friendly, by which I mean Faust used a lot of popular culture sources, particularly songs, rather than relying entirely on letters, speeches, and other staples of straight-up history. Professional historians are becoming more and more friendly to a wide range of sources all the time (though many of my fellow students over in the history dept are still skeptical of material culture). Sensible people in local historical societies, museums, and high schools have long understood that popular sources (songs, cartoons, advertisements) are both enlightening and engaging, but there's still a subtle prejudice against historians who devote themselves to studying women's magazines or photography as somehow being "soft." Hopefully, that attitude's on its way out, but there are still a lot of people who confuse "smart" with "abstruse."

I am happy to report that Drew Gilpin Faust is not one of those people. Her book will appeal to professional historians and interested amateurs alike. I wish she had gone a little more into memorialization, but her work is excellent background for anyone interested in Civil War memory.
Posted by Caitlin GD Hopkins at 8:58 PM