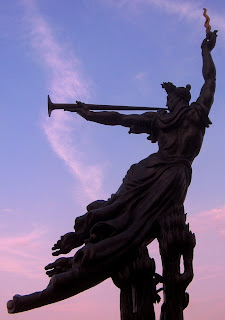 I recently finished a research paper on the Confederate monumental landscape at Gettysburg. I enjoyed writing it and my professor was encouraging, so I may try to turn it into something publishable.

In addition to the three major sections, I included an introductory section about the Union monumental landscape at Gettysburg so that I could compare the two at various points. One important difference between the Union and Confederate monuments at Gettysburg is that the vast majority of the former were erected by veterans during the 1880s and 1890s, while almost all of the later were built by veterans' descendants during the 20th century. While Union monuments generally commemorate the actions of Northern soldiers at the battle of Gettysburg, Confederate monuments attempt to offer commentary on the causes and meaning of the war.

I will post some modified sections of this paper here over the next few days. If you have any suggestions, please leave them in the comments. This project is in its infancy, and I know there are a lot of knowledgeable people out there, so any tips, counterarguments, or suggestions would be most welcome.