Proponents of “push” arguments have focused on two types of hardship: religious persecution and economic opportunity. Since at least 1886, when George Bancroft portrayed the “Pilgrim Fathers” as “peaceful farmers” who were “harassed by imprisonments, search warrants, trivial prosecutions, and the various malice of intolerance,” historians have considered religious intolerance in England, particularly under the policies of Archbishop Laud, to be a major factor in transatlantic migration. Although the religious persecution argument has come under attack from more recent historians, including David Cressy, it is still a major element of many “push” arguments. 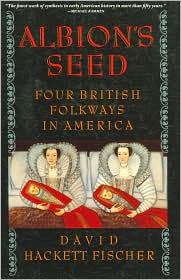 In Albion’s Seed: Four British Folkways in America (1989), David Hackett Fischer places religious persecution at the forefront of the many factors driving the “Great Migration” of Puritans to New England during the 1630s. Fischer argues adamantly that religion was “not merely [their] leading purpose[;] it was their only purpose” (Fischer, 18). Although he acknowledges economic opportunity in New England and the possibility of evangelizing among the Native Americans, Fischer sets out a strong “push” argument. “This exodus was not a movement of attraction,” he declares, “the great migration was a great flight from conditions which had grown intolerable at home” (Fischer, 16). Since the East Anglians who settled in New England intended to establish godly communities rather than plantations, gender ratios were more balanced and “normal family life was not the exception but the rule” (Fischer, 27). 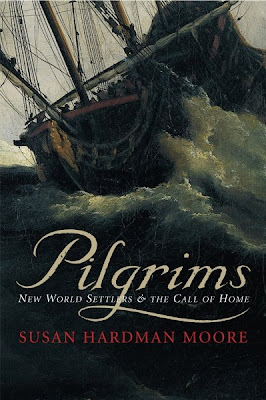 Susan Hardman Moore echoes Fischer’s arguments in Pilgrims: New World Settlers and the Call of Home (2007), emphasizing Laudian policies as a driving force behind the Puritan exodus and characterizing movement to New England as “the most family-centered migration in America’s history” (Moore, 21). Moore draws a clear sociological distinction between those who migrated to New England and those who traveled to other Atlantic colonies, noting that the former were more prosperous, better skilled, and were spread across a wide age spectrum. The New England settlers’ most important trait was their tendency to travel in family groups along with “other local families, bound together by kinship and acquaintance over many years” (Moore, 21). By stressing the importance of family migration, Moore gives the impression that gender ratios among New England-bound migrants were balanced, and she does not offer any evidence to dispel that assumption.

What neither Fischer nor Moore can explain is why there was any gender disparity at all in migration to New England. While a population that is nearly 40% female is much more balanced than those found in most other English colonies, the imbalance is still pronounced.* If they are correct in arguing that religious persecution was the primary force driving whole families to New England, equal numbers of men and women should have been affected. Fischer notes that, if church membership is any indication, “it would be statistically more correct to say that many Puritans led their husbands to America,” but does not venture any explanations for the gap between women’s religious loyalties and their failure to cross the ocean (Fischer, 27). Ultimately, Fischer and Moore’s explanations of migration to New England are unsatisfying because they ignore the realities of gender disparity in favor of the logic of their family-centered arguments.

The other type of “push” argument foregrounds economic hardship and population pressure in England. Even historians who argue that migrants were attracted to America by the promise of opportunity concede that 17th-century England was undergoing rapid population growth, massive dislocation of agricultural workers, and a tightening job market. While modern historians seldom advance a strong “push” argument without acknowledging that migration was a “multilayered, multitextured phenomenon,” many explain migration primarily as a direct result of poverty at home (Horn, 48).

In Adapting to a New World: English Society in the Seventeenth-Century Chesapeake (1994), James Horn defines economic upheaval in 17th-century England as the result of three interconnected trends: demographic growth, the development of national markets, and the creation of new types of economic ventures, including cottage industries and joint stock companies. In this telling, overseas migration was merely an extension of England’s internal migration patterns as populations responded to new social and economic realities. While some wealthy individuals hoped to increase their fortunes by moving to America, most English inhabitants of the Chesapeake arrived as servants, for whom “poverty appears again and again as a determinant” (Horn, 62). 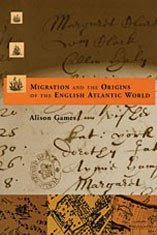 Alison Games makes a similar argument in Migration and the Origins of the English Atlantic World (1999), contending that, “migration within England was a part of the life cycle for most young men and women” during the period of demographic growth and economic strain (1580-1640) (Games, 16). Although she mentions women’s mobility briefly, most of her subsequent discussion focuses on migrants who “tended to be young and male, menacing in their poverty and freedom from masters” (Games, 17). The great strength of Games’ work is in her meticulous collection of data, which allows her to give precise statistics for migrants by age, sex, and destination. Using records from overseas voyages originating in London in 1635, Games can compare groups of migrants who traveled to Virginia with those who traveled to Barbados, New England, and continental Europe. In all cases, male migrants far outnumbered their female counterparts (Barbados, 94:6; New England, 60.9:39.1; continental Europe, 73:27) (Games, 24, 47). Although Games discusses gender imbalance as a defining characteristic of transatlantic migration, she does not explain why men and women seem to have responded differently to the potent forces of population increase and unemployment.

Both Horn and Games offer persuasive arguments about the economic and demographic roots of migration, but they do not go far enough in historicizing the developments that led to the gender disparities that both acknowledge. If English subjects were indeed starving in their villages and migrated both within England and beyond to find sustenance, historians must provide compelling evidence to explain why men left while women stayed when both would have suffered. In the absence of investigation, these authors imply that it is natural for men to move and for women to remain homebound. Their work, particularly Games’ data, will be essential to further inquiry into English migration, but it is not sufficient for explaining the scarcity of women among transatlantic migrants.

Horn and Games do not reconcile their “push” arguments with the data suggesting that men and women were unequally prodded, but they do suggest a potentially fruitful area in which their work could be extended. Both agree that London served as a crucial “staging post” for those wishing to travel to any overseas destination. According to Horn, “younger sons of gentry, yeomen, and provincial tradesmen flocked to London” to take advantage of new jobs created by transatlantic commerce, and many ended up accompanying their goods to America (Horn, 61). Although neither Horn nor Games explores this point, a possible explanation for gender disparity in migrating populations is the importance of initial travel to London, which may have attracted more “masterless men” than masterless women.