On our way home from Columbia, my sister and I swung by the Windham, CT graveyard as well. It was starting to rain, so we didn't stay long, but I did manage to make a few good finds.

My favorite was the Elisabeth Huntington stone (1733), which displays this post's titular quote. The carver (possibly Obadiah Wheeler) ran out of room for the seventh line of the inscription, resulting in this unfortunate phrase:

If you squint, you can see the faint "nt" carved in above the end of the line. Poor Elisabeth Huntington. 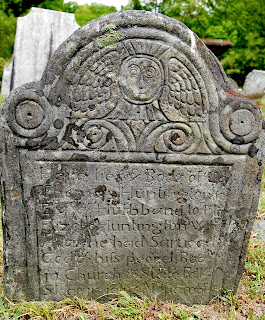 Another good find was the Thomas Huntington stone (c. 1730), which states that Thomas was "Husbband to Mrs. Elizabeth Huntington" (not the Elisabeth Huntington previously mentioned - his wife's stone is nearby and the Huntingtons were a big family - see my previous post on the popularity of the name Elizabeth). It is probably significant that this stone was carved by Obadiah Wheeler, who is also known as "the Collins master," and the Lebanon stones that mention husbands were carved by Benjamin Collins. In Graven Images, Ludwig argues, "either Benjamin Collins learned about carving from the Collins master or he might himself has been the Collins master" (Ludwig, 382). Other scholars have determined that Wheeler was the Collins master, but Ludwig is probably right about there being a close connection between the two. So far, all the stones I have found that mention that the deceased was the husband of so-and-so came out of this workshop. 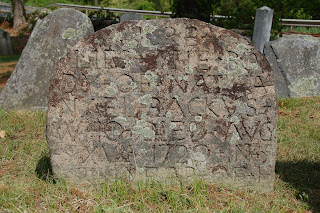 There were a few other notables, including the Nathaniel Backus stone (1720), which was made by the Norwich Ovoid carver, the Anne Mason stone (1724) by John Hartshorn, and the Lydia Gray stone (1706?), which is very much like the Miriam Walton stone and the Arnold Coddington stone (1742) in Providence, but I don't know the carver by name. 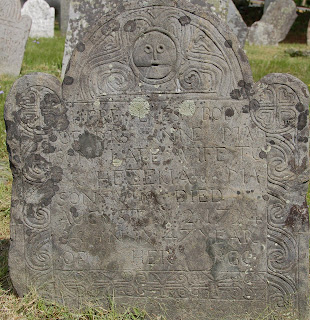 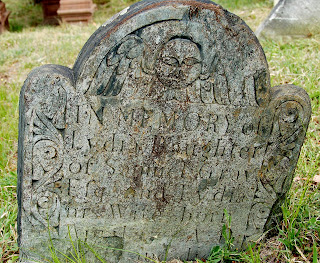