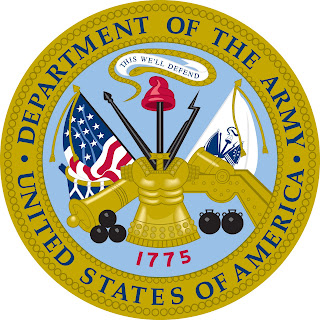 Apparently, I was wrong to assume that the government would be unwilling to display the overtly phallic image of the liberty pole and cap. The amazing image I posted yesterday can be seen (in modified form) on the current emblem of the United States Army. Granted, it's a little less explicit and the shaft is not being "supported" by a dozen tiny hands, but it's still a phallus. The slogan, "Hanc Tuemur, Hac Nitimur" is also preserved in the form of a snake saying, "This We'll Defend." Why a snake? I suppose it's a "Don't Tread on Me" or "Join, or Die" reference, but I still find it interesting to find a talking snake on any of our government's official emblems.

I guess this iteration of the symbol isn't so overtly phallic, and it might be difficult to argue that it is without seeing its antecedent. But knowing where this image originated, I feel pretty comfortable pointing out that it is, indeed, a penis.
Posted by Caitlin GD Hopkins at 7:09 PM