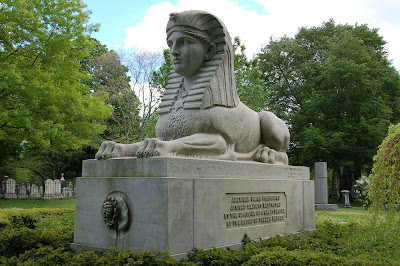 In honor of Memorial Day, I am posting a few pictures of Mount Auburn Cemetery's Civil War memorial. Designed by Martin Milmore, the "American Sphinx" was dedicated in 1872, making it one of the earlier Civil War monuments.

This monument is also noteworthy because it is one of the few that explicitly acknowledges slavery as an important factor in the war. In wealthy, abolitionist Cambridge, it was perfectly acceptable to count emancipation among the war's positive outcomes.

The English version of this inscription, which appears on the other side of the monument's base, reads:

On this Memorial Day, let us not forget the men, black and white alike, who fought for line #2.

Obligatory disclaimer: Of course, I am not claiming that all Union soldiers were abolitionists. For many Northerners, line #1 was plenty of motivation. But for a large number, including the nearly 200,000 African-American soldiers, line #2 was pretty important.
Posted by Caitlin GD Hopkins at 1:53 PM