After yesterday's thunderstorms, we had a beautiful day here in Boston. I took advantage of the weather to visit the Copp's Hill Burying Ground near the Old North Church. It's a beautiful location, overlooking the water and surrounded by brick row houses.

One of the downsides of visiting these historic Boston/Cambridge graveyards is that they are so meticulously documented and preserved that it often feels like there's noting left to discover. It's like going to one of those antique stores where everything is labeled and locked in glass cases. I'm more of a flea market/junk shop fan myself. 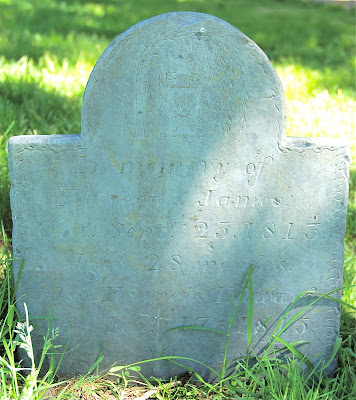 Even so, I found a few interesting things. My favorite discovery was a little slate stone under a big tree in the front, right-hand section of the graveyard. The pictures aren't great because it was shady, but you can click on the picture to blow it up to a readable size. This stone is dedicated to two little boys, Theodore James (1813) and Francis Edward (1815), both of whom died around the age of two. The stone has an unremarkable urn-and-willow design and does not stand out in a graveyard so full of remarkable and beautiful stones.

The interesting part of this stone is its back. On the reverse side, the stone is covered with upside-down writing from an older stone that has been recycled and recut to make the Theodore James/Francis Edward stone. 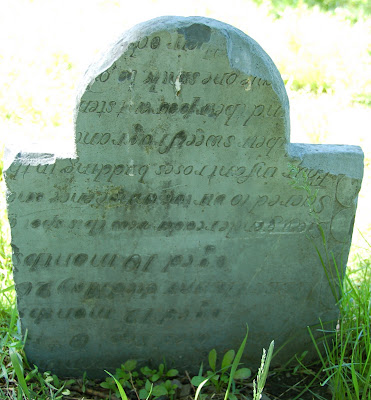 Much of the identifying information (names, dates) has been cut away, but if you rotate the previous photo, some details emerge. 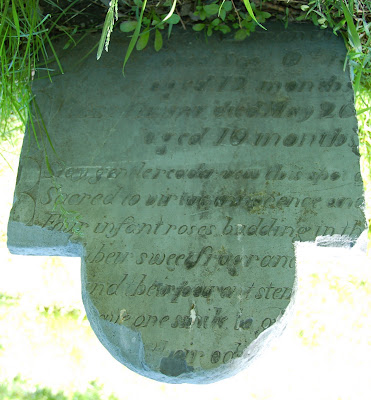 The older stone, which must have been much larger than the newer, seems to have memorialized four young children. One partial line of the epitaph reads, "Four infant roses budding . . ." It is also possible to make out two ages: 10 and 12 months.

Why was an earlier stone cut down to make a newer one? Are both stones from the same family? Do they commemorate some of the same individuals? Did the earlier stone break and this was the only salvageable piece? Perhaps some research is in order, though I'm not optimistic about the possibility of written records pertaining to this incident.
Posted by Caitlin GD Hopkins at 5:17 PM