Between the end of the 17th and the end of the 19th century, most New Englanders learned to read from The New England Primer. This book included an alphabet, short passages, and a catechism (John Cotton's Spiritual Milk for Babes).

You can find the illustrated alphabet on the wikipedia page. Note that there are only 24 letters (I/J and U/V are combined). You may recognize some of the couplets: 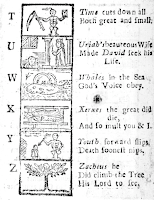 A:
In Adam's fall,
We sinned all.
B:
Thy life to mend,
This Book attend.
F:
The idle Fool
Is whipt at school.
In one section, pupils are given lists of words with the same syllable count. The monosyllablic words are fairly tame (God, child, grace, knit), as are the disyllabic words(boldly, father, husband), but things get a little strange in the 3+ categories. Here are the first four trisyllabic words from the 1727 version:

Abusing
Bewitching
Confounded
Drunkenness
Cheery, no? The polysyllabic lists aren't quite as dreary, though you will find "Discontented" in the four-syllable list and "Fornication" on the five-syllable list.
The primer also includes some short prayers, such as the well-known "Now I lay me down to sleep. . ." For obvious reasons, I found this one more interesting:

I In the Burying place may see
Graves shorter there than I;
From Death's arrest no age is free,
Young children too may die.
My God, may such an awful sight
Awakening be to me!
Oh! that by early Grace I might
For Death prepared be.

Posted by Caitlin GD Hopkins at 8:50 AM

The last poem on children thinking of their potential early deaths seems pointlessly grim unless you think about how true it was! Few schoolchildren had not lost siblings to some disease or accident. If you believed in an afterlife of punishment or reward in a world of sudden death, there's no age too early to be mindful of your own death.