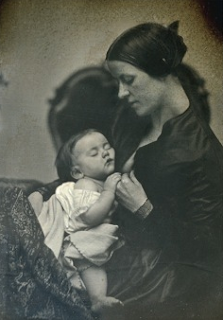 Jill Lepore's new essay on breastfeeding in The New Yorker has raised a few hackles in the feminist blogosphere, but I think it's brilliant.

Lepore traces the history of breastfeeding from the 18th century to the present, explaining how nursing waxed and waned in popularity along with ideological shifts. When the cult of domesticity was in, breastfeeding was big. When Freud argued that "infants experience suckling as sexual pleasure," not so much.

Lepore is also sensitive to the ways in which race and class have shaped perceptions of breastfeeding. At the turn of the 20th century, wealthy white women gave up breastfeeding because they associated with the animalism commonly attributed to the poor and women of color. Doctors even did "scientific" studies to show that white women were so highly evolved that their milk was less nutritious than animal milk or milk from "lower" women. Lepore covers a lot of ground, but she does so concisely.

Her main point is that the modern focus on pumping or "expressing" milk is part of a move toward treating breast milk as a medicine or magical elixir and that the relentless focus on making pumping easier for working women actually precludes a more radical approach to making motherhood and work outside the home more compatible. If NOW and the federal government and the state legislatures are all doing their best to reward companies that have comfortable pumping rooms, they aren't fighting for more substantial changes, like paid family leave or on-site infant care. Lepore cuttingly observes that many corporate pumping rooms explicitly ban infants. These rooms are not meant to make it easier for women and babies to be together — they are meant to make it easier for companies to argue that they have family-friendly workplaces that are not really family friendly. Another (implicit) point is that only affluent mothers can find even these minor concessions in the workplace and NOW's capitulation in making pumping-friendly workplaces their #1 priority on this issue hurts poor women (who stand to gain the most from federally-mandated paid family leave for all workers).

The line that has garnered the most outrage from feminist critics is Lepore's question, "When did 'women’s rights' turn into 'the right to work'?" Some bloggers, apparently unaware of the Orwellian overtones of 'right to work' in a labor history context, have drastically misinterpreted Lepore's meaning here. They seem to think that Lepore is calling women's right to work outside the home trivial, when what she is really saying is that corporations have seized the framing of this issue in such a way that even NOW concedes that a pumping room that isn't a bathroom is a family-friendly policy. In reality, the focus on pumping is a way for corporations to force mothers to conform to corporate standards, rather than making corporations change to suit parent-workers.

Over at Salon, Kate Harding (who is generally very insightful) jumps overboard and misses the ocean on this one:


Oh my god, are you kidding me? Even if I'm as generous as possible in trying to understand Lepore's point here -- which apparently has to do with the value of mother-child bonding and the resultant need for longer maternity leave -- implying that the hard-won right to work outside the home ought to be regarded as a comparatively trivial concern by the National Organization for Women is throwing the baby out with the leftover expressed milk.

That is not the point at all. In this context, "right to work" does not mean "the hard-won right to work outside the home," it means "the right of corporations and government to force every adult to work under a rigid corporate regime." Historically, "right to work" has been a phrase connected to union-busting, wage-reduction, and forced labor. In the 19th century, government and corporate power teamed up to interpret the "right to contract" as meaning that any able-bodied man without a "visible means of support" could be arrested and forced to work withut compensation (I recommend Amy Dru Stanley's article, "Beggars Can't Be Choosers: Compulsion and Contract in Postbellum America" in the JAH, 1992). Harding misses these associations entirely and bizarrely concludes that Lepore is arguing that "Mommy should stay home." That is a shockingly obtuse misreading of Lepore's nuanced argument.

Maybe the problem is that all the "Mommy wars" crap that focuses on blaming/shaming/judging is written so narrowly that people expect any essay on a related subject to be just as bad. It's difficult to make a thoughtful point if the audience is looking for key words that will help it identify the argument with a position that comes with lots of associations already attached. I've found this to be the case when talking to people who are skeptical about TFA — bring up the quality of traditional teacher education and you are automatically a "teacher hater," never mind any point you might have had.

Whatever Harding may think, Lepore is not "taking one side" in the "breast-feeding wars." Instead of "Mommy should stay home," Lepore says,


It appears no longer within the realm of the imaginable that, instead of running water and a stack of magazines, “breastfeeding-friendly” could mean making it possible for women and their babies to be together.

Is asking for a truly family-friendly workplace the same as saying, "Mommy should stay home"? I don't think so, and I think that feminist critics should give this piece a second read. It has more to say than some are giving it credit for.


Update: Jill Lepore appeared on Talk of the Nation on Wednesday to talk about this article. The segment is available here. Lepore makes her main points about how legislation/tax breaks are encouraging pumping in the workplace rather than promoting breastfeeding, and how pumping introduces corporate profits into the breastfeeding equation. Curiously, the only callers on the show are women who want to tell their own nursing anecdotes and are only secondarily (if at all) interested in the larger argument. Are these the best calls the show received, or are these just the ones the call screener chose? Each caller tells the same story — "Well, pumping was good for me" — but doesn't really engage with the larger issues.
Posted by Caitlin GD Hopkins at 10:01 AM

Well said! With all the pumping, when is the nursing taking place? And the idea that you can pump at work but not have your baby there says a lot about what is family-friendly.

NOW and all of us should be pushing for paid family leave, which is the real necessity for women and for men.