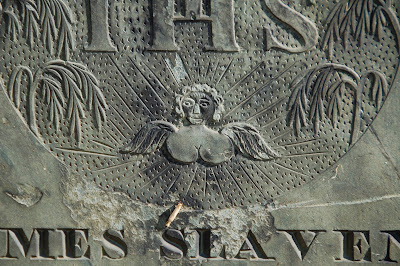 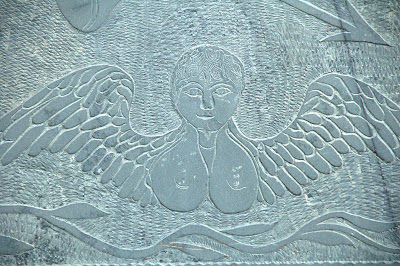 David Payson, Wiscassett, ME, 1814
These images are interesting data points in the angel vs. soul effigy debates. They certainly don't represent the souls of James Slaven and David Payson, unless there's an argument to be made for a male body/female soul pairing. And those ladies are most definitely female.

I might understand giant breasts for James' gravestone — after all, he was a baby (19 mo.), and there is a conflation of the spiritual succor and motherly love themes.

They're a little harder to explain on the gravestone of Colonel David Payson, age 53.

For more on breast imagery on early American gravestones, see this post.

Posted by Caitlin GD Hopkins at 7:38 AM

In the case of the Slavin stone, perhaps the carver completed the face first and thought--"Ugh! That is not angelic at all!" Then he thought of way to make the figure attractive (to men at least) despite the face...

I am thinking that the Payson stone looks like an angel with head on hands, and those are elbows with wrinkles. On the Slavin stone, those are some breasts, alright.