101 Ways, Part 23: Summoned to Appear Before His Judge 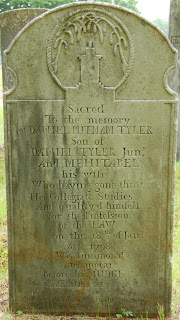 From Brooklyn, CT, one of my all-time favorite epitaphs:


Sacred
To the memory
of DANIEL PUTNAM TYLER
Son of
DANIEL TYLER Junr,
And MEHITABEL
his wife
Who having gone thro'
His Collegiate Studies
And qualify'd himself
For the Profession
of the LAW
on the 18th of Janr,
AD. 1798
Was summon'd
to appear
Before his JUDGE
AEtatis 21
In life's and nature's freshest bloom
Death came remorseless on and sunk him in the tomb.


DANIEL PUTNAM TYLER, son of Captain Daniel Tyler (Harvard College 1771), of Brooklyn Parish, in Pomfret, Connecticut, and grandson of Daniel and Mehitable (Shurtleff) Tyler, of Brooklyn, was born in Brooklyn on March 1, 1776. His mother was Mehitable, daughter of General Israel Putnam and Hannah (Pope) Putnam, of Brooklyn. On of his brothers was graduated here in 1808. David Putnam (Yale 1793) was a first cousin. He settled in Whitesboro, Oneida County, New York, but died there of fever in 1798, at the age of 22.

Posted by Caitlin GD Hopkins at 6:39 AM

I love this series! Keep it up!

Thanks!
I haven't forgotten about Jason Russell — he's in the queue.