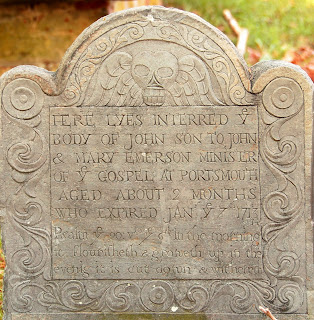 Here is another gravestone dedicated to the infant son of a minister. John, son of Rev. John and Mrs. Mary Emerson of Portsmouth, NH, died when he was two months old and is buried in Ipswich, MA. The Emersons were originally from Ipswich and moved north in 1704, after John was called to the church in the new town or New-Castle. I don't know why they decided to bury baby John in Ipswich instead of closer to home.

"Expired" is such an expressive and poignant way to say "died," especially when referring to the death of a tiny infant.

HERE LYES INTERRED ye
BODY OF JOHN SON TO JOHN
& MARY EMERSON MINISTER
OF ye GOSPEL AT PORTSMOUTH
AGED ABOUT 2 MONTHS
WHO EXPIRED JAN ye 7TH 1713
Psalm ye 90: vrs ye 6th In the morning
it flourisheth & groweth up in the
evenig it is cut down & withereth.

Posted by Caitlin GD Hopkins at 6:41 AM