This Lamson family stone stands in the Harvard Square graveyard in memory of Elizabeth (Muzzey) Hovey, the very young wife of John Hovey, a schoolteacher. Elizabeth was the daughter of John Muzzey of Lexington. The couple married in 1727, two years after John's graduation from Harvard.

John and Elizabeth Hovey married very young for 18th-century New Englanders (she was 17, he was 20). In Albion's Seed, David Hackett Fischer aggregated the marriage ages for 17th-century New Englanders from several town studies and put the average age of marriage at 26 for men and at 23 for women. My own research on women born in Boston in the year 1739 indicates that their mean age at marriage was 23.6 (median and mode 23, only 18% were 18 or younger). In some cases, early marriage followed pregnancy, though I have no evidence that that was the case here. John Hovey's entry in The Hovey Book does not mention any children born to John and Elizabeth (though pregnancy is still a possibility). 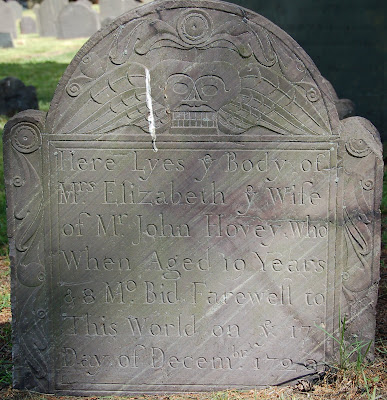 That's that beautiful purple and green banded slate you see in so many early burying grounds in the Boston area. I wish a geologist would give me a lecture on it. There must be a paper in the old geological literature somewhere on Massachusetts slate quarries. I seem to recall reading that this banded slate came from an early quarry in Braintree, but I'm not sure. I would love to see a map of the 17th and 18th century quarries -- and wouldn't it be fantastic to take a tour of them. I wonder if any could still produce good-enough slabs for carving.

You know, I've never really thought much about the quarries. Now that I think about it, there are some very distinctive stones — I'm thinking of some of the Malden stones that are almost black with streaks of red (iron?).

Good idea. I'll look around for this.

Here are the random items I remember just in passing from reading, without ever having made a special search. It would be wonderful to have a page gathering this material together (or maybe just another blog label for posts on the topic).

One of the islands in Boston Harbor was a "slate island" that was discovered very early, and it may be the source for some of the earliest stones.

Much of the beautiful banded slate, usually green and purple, that can be found in many eastern Mass. graveyards, came from a quarry in Braintree. I think it's sometimes called "Braintree banded slate." While individual quarries have a point location, rock formations may of course extend over a considerable area, so there may be outcroppings of "Braintree banded slate" in a number of different towns.

One of the most important Massachusetts quarries was the Pin Hill quarry in Harvard, active from at least the mid-1700s on. This produce a very high quality dark slate, and many of the well-known inland carvers owned rights in this quarry (William Park, Jonathan Worster, John Dwight, etc.).

The was another variety of slate in the Worcester area called "Worcester phyllite." It was commonly used by William Young, "the thistle carver of Tatnuck." It is unfortunately low-grade, and very rusty. Harriett Forbes talks about it in her volume; there is one example in Fitchburg, notably rusty and mostly delaminated; a clear contrast to the knife-sharp Pin Hill slate that is as beautiful today as the day it was carved.

That's the totality of my knowledge. I hope you'll post more as you learn more. We should be grateful to the people who poked through the woods and fields centuries ago and found these deposits -- the only reason we still have these wonderful gravestones to study, 300 years after they were carved, is the exceptional quality of the material used to make them.

Look at how similar the carving is on this stone!

You will find stones from the big New England shops (Lamson in Charlestown, Stevens in Newport, Foster in Dorchester) up and down the east coast as far away as South Carolina. It was relatively easy to transport gravestones by water, but cumbersome to do so by land, so you may see more Lamson stones in Long Island than in Springfield, MA.