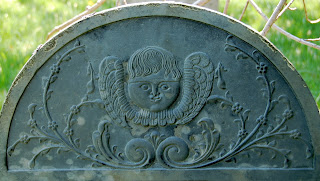 Writing about the unnamed Payson infant reminded me of this very impressive stone in Newburyport, MA. Dedicated to young Theodore Parsons, age 7 months, it is the most elaborate stone I have ever seen erected over the grave of an infant. Theodore's father, Theophilus Parsons, was an influential lawyer who served as Chief Justice of the Massachusetts Supreme Court and trained a young John Quincy Adams. Parsons, a powerful man in a wealthy town, was able to afford this stone for his son. It's a little over-the-top:


HERE LIES THE BODY OF
THEODORE PARSONS
AN INFANT SON OF
THEOPHILUS PARSONS, ESQR.
AND
MRS. ELISABETH PARSONS.
HE ENTERED THE THEATRE OF LIFE
AUGUST XIITH MDCCLXXXVI,
AND INNOCENTLY RETIRED FROM IT
FEBRUARY XVIII MDCCLXXXVII.
Thus have they seen the fairest, sweetest flower,
Sparkle and smile in all it's [sic] morning pride;
Ere fleeting time had wing'd a transient hour,
It hung it's [sic] fading head, and droop'd and died:
Beneath, the CANKER-worm insidious lay,
And clos'd the blossom, opening to the day. 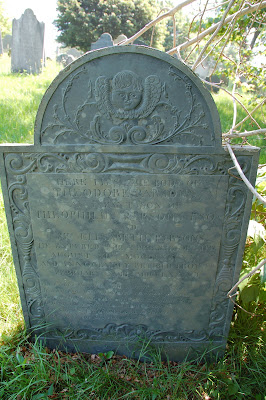 a
Posted by Caitlin GD Hopkins at 6:27 AM