Wednesday was such a nice fall day, I had to blow off my reading and take a road trip. I ended up in Bristol, RI at the North Burial Ground, which is right next to Colt State Park.

There, I found this great stone which, unfortunately, is in tragic shape. I noticed about thirty other stones in this cemetery that have fallen and are half buried and mown over, as well as another dozen thrown in a pile. I don't know what their conservation policy is in Bristol, but it seems to involve attrition rather than preservation. 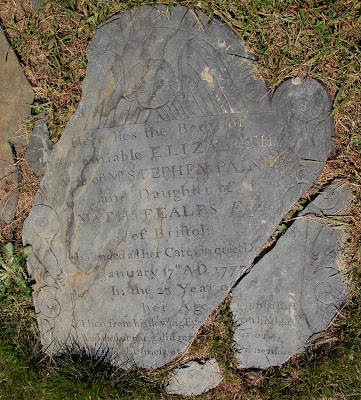 Here lies the Body of
the amiable ELIZABETH
Wife of Mr. STEPHEN PAINE
and Daughter of
NATHL. FEALS Esq.
of Bristol
who ended all her Cares in quiet Death
January 17th A.D. 1777
In the 23d. Year of
her Age.
Update: I should add that this stone was carved by Stephen Hartshorn, descendant of John Hartshorne. According to James Slater, Stephen and his brother Charles did not follow in their ancestor's "carving tradition but rather in that of George and Gabriel Allen and the Narragansett Basin school of carving on slate" (Slater, The Colonial Burying Grounds of Eastern Connecticut, 112).
Posted by Caitlin GD Hopkins at 7:05 AM