Cross-posted at American Creation. I hashed some of this out in earlier posts here. 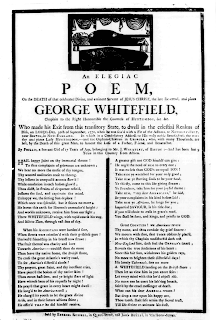 Much of the discussion on this blog concerns the personal faith of the political leaders who shaped the American government in the 18th century. Today, I’d like to offer a short peek into the mind of an ordinary citizen and how he understood God’s role in the political process.

The man: John Boyle (1746-1819), printer of newspapers and books in Boston.* Boyle was highly literate, but not a college-educated man. He worked as a printer’s apprentice for John Green, publisher of the Boston Post-Boy, later going into partnership with Richard Draper at the Massachusetts Gazette. From 1759 until 1778, he kept a diary that reported on the news around Boston, running 1500 entries and chronicling events such as the Boston Massacre, Lexington and Concord, and the occupation and siege of Boston. Boyle, a staunch supporter of the Whig/patriot/revolutionary cause, may have been a participant in some of these incidents. (Note: I am currently transcribing and annotating this diary.)

Boyle does not often discuss his religious beliefs in the diary, though his admiration of Rev. George Whitefield may provide some clues. He rarely mentions God or "Providence” explicitly, even at moments of great significance, such as the death of his wife. Although he occasionally mentions church news (appointment of a new minister, building of a new church, etc.), he does not invoke a personal deity or record any of his personal musings on religion in this journal. The only prayers he mentions are the opening prayers at town meetings. Judging by his strict attention to recording their proceedings, Boyle found town meetings more meaningful (or at least more journal-worthy) than church.

Yet, Boyle’s diary does indicate a belief in an active and intervening God. This God is firmly aligned with John Boyle’s politics and can be relied upon to punish Boyle’s political opponents. In fact, practically the only times when Boyle mentions or implies a belief in an active God are times when that God is either protecting Americans from British soldiers or exacting revenge on Loyalists/Tories.

On February 22, 1766, Boyle wrote about the Massachusetts House of Representatives’ decision to censure Brigadier General Timothy Ruggles (president of the Stamp Act Congress) for failing to sign an Anti-Stamp Act petition. Boyle had never mentioned Ruggles before, but a mere six entries later, the General shows up again:

Brigadier General Ruggles of Hardwick, being with some Men who were falling some Trees, one of the Trees falling sooner than expected, struck the Brigadier before he could get out of the Way, whereby he was greatly bruised, and had several of his Ribs broke, also one of his Arms in two places.

A comparable fate befell Andrew Oliver, the Stamp Commissioner. In 1765, a mob of Bostonians ransacked Oliver’s house, but did not destroy it. According to Boyle’s diary, the work was completed by a higher power:

This Evening (Saturday) between 11 and 12 o'Clock, a terrible Tempest arose, attended with the severest Thunder and Lightning that has been known for many years. It lasted very violent for about two hours but thro' the Goodness of Divine Providence, no Damage was done in this Town, except to the Dwelling-House of Lieut. Govr. Oliver, which was struck with Lightning and considerably shattered.

Of course, if the “Goodness of Divine Providence” shielded the rest of Boston from the storm, the implication is that Oliver did not enjoy that protection.

In addition to these precision strikes, Providence looked after Whig-leaning Bostonians with more impressive gestures. During the occupation of Boston, Boyle commented on a storm off of Newfoundland, exaggerating the number of dead and identifying them as potential occupiers:

. . . 4000 Persons were lost in the several Harbours of Newfoundland, who had nearly compleated their fishing Voyages. Most of them belonged to Great Britain, and intended to inlist in the Regular Service when their Fares were finished.

On August 9, 1775, “the Almighty” performed his greatest act of protection, shielding the people of Massachusetts from British attacks:

[Captain Lindzey] immediately fired a Broadside upon the thickest Settlements [in Gloucester], and stood himself with diabolical pleasure to See what havoc his Cannon might make, “Now, (said he) my Boys, we will aim at the damn’d Presbyterian Church — Well, my brave Fellows, one Shot more and the house of God will fall before you.” While he was thus venting his hellish Rage, and setting himself as it were against heaven, the Almighty was on our side, not a Ball struck or wounded a single Person, although they went right thro’ the houses in almost every direction when filled with Women and Children; under God, our little Party at the Water-side performed Wonders, for they soon made themselves masters of [the attacking force].

What is most striking about Boyle’s “Gott mit uns” attitude is how quickly he adopted a definition of “us” that included only his political allies. Only a few years earlier, Boyle was writing rapturous entries about “our most gracious Sovereign King George the second” and “our” military victories in Canada. By 1775, not only were Tory Bostonians “enemies,” but the ordinary fishermen of Newfoundland “belonged to Great Britain” and were smite-worthy. In the Gloucester passage above, there’s a lot of “our little party” and “our side” where “we” are Massachusetts residents who supported the revolution, even if they were Presbyterians rather than Congregationalists.

John Boyle is not generally considered to be one of our “Founding Fathers,” unless we take that term to mean all members of the revolutionary generation. He was not a politician or a jurist or a philosopher. He was just a regular guy who had some minor influence because he helped run a newspaper in an important urban center at a time of crisis.

Still, I think that Boyle’s view of Providential interference in politics is pertinent to the discussion on this blog. His diary does not indicate a preoccupation with religious questions — Boyle is no Cotton Mather practicing “daily dying” or devout parishioner reflecting on the weekly sermons in his journal — but an active God is clearly present in his worldview. I have not gotten the impression that Boyle spent much time investigating the theology of political liberty or the relationship between natural and Biblical law. He believed in a God who was on his side, but that is about it, as far as I can tell.

I find John Boyle’s religious outlook so interesting because he clearly believed in God, but did not lead a God-centered life. In that way, he seems like a lot of semi-apathetic Christians today — he went to church and saw God at work in his life from time to time but did not attribute his everyday experiences to the influence of a higher power nor probe the philosophical underpinnings of his beliefs. In dozens of entries, he recounts the early struggles against British political and military interference as a matter of practical, immediate necessity, not as a great struggle to enact abstract principles. In Boyle’s in-the-trenches view, the founding of America was not necessarily a Christian mission, but the project did have a supernatural ally.

*Note: The accompanying image is of a broadside containing Philis Wheatley's elegaic poem to George Whitefield, which was sold (and possibly printed) by John Boyle.
Posted by Caitlin GD Hopkins at 6:03 PM