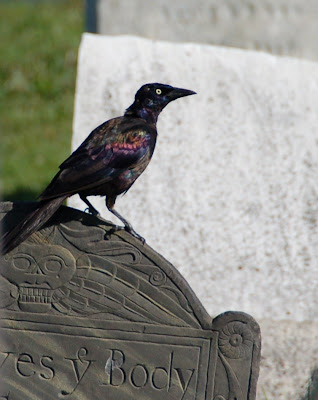 Any bird lovers out there? I'm trying to identify this bird, which I spotted in Charlestown, MA at the end of August. I've been told that it is a grackle, and that seems to be right, though it is more iridescent on the wing and less blue around the collar than the common grackle. Is it just a particularly flashy individual or is it a particular variety? It looks like a great-tailed grackle, but this map says that the great-tailed grackle doesn't live in New England. Any suggestions?

If I were a grackle, I would definitely maximize my spookiness by living in an old graveyard. This is a grackle with style.

Also, if it helps with identification, here is a pic of the bird it was hanging out with, which I assumed was a female grackle: 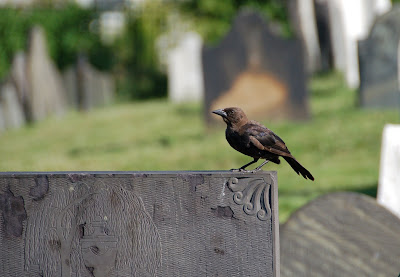 Posted by Caitlin GD Hopkins at 8:04 AM

Yes indeed, just a regular old Common Grackle (Quiscalus quiscula). The second one would be a juvenile, born this summer, perhaps the offspring of the first (if they were together).

Cemeteries, as green, quiet places, are important wildlife sanctuaries. Mount Auburn is one of the most famous birding sites in the United States -- go there at 6:30am on any May morning and you'll see. A few of the hundreds of people there might even be able to point out the natural gravestone of William Brewster, one of the great New England naturalists of the 19th century, and might remember its verse: "For, lo, the winter is past. The flowers appear on the earth; the time of the singing of birds is come."