101 Ways, Part 28: Barbarously Murdered in His Own Home by Gages Bloody Troops 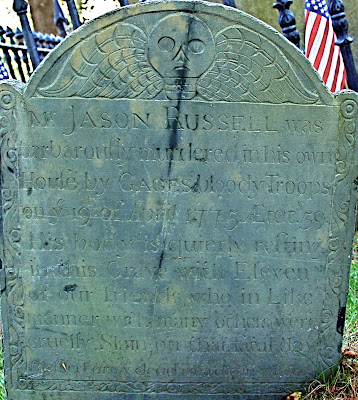 On April 19, 1775, as the colonial militia chased the British Regulars back to Boston, some of the fiercest fighting took place in Menotomy/Arlington, near the home of Jason Russell. Russell, a 58-year-old farmer refused to flee with his neighbors. Supposedly declaring that, "An Englishman's home is his castle," he barricaded his door and decided to stay and fight. When his wife and children returned to the house after the battle, they found his bayonetted corpse (along with eleven other dead Americans and several Regulars scattered around the house and orchard). The Russell house still stands in Arlington — it is a museum and the headquarters of the Arlington Historical Society.


Mr. JASON RUSSELL was
barbarously murdered in his own
House by GAGES bloody Troops
on ye 19 of April 1775 AEtats. 59.
His body is quietly resting
in this Grave with Eleven
of our friends who in Like
manner with many others were
cruelly Slain on that fatal day.
Blessed are ye dead who die in ye Lord.
I'm not really sure when this stone was erected, but, as Lori pointed out in comments, if it was put up during the occupation, it is a bold political statement. I think that it was probably carved soon after the battle because it stands in the shadow of a giant, post-war obelisk dedicated to Russell and the other dead. I'm just guessing here, but it looks like the slate stone was erected right away and the obelisk replaced it later.

The Jason Russell stone isn't the only occupation-era gravestone with an overt political message. In Billerica, MA, two epitaphs reference the war and its hardships. 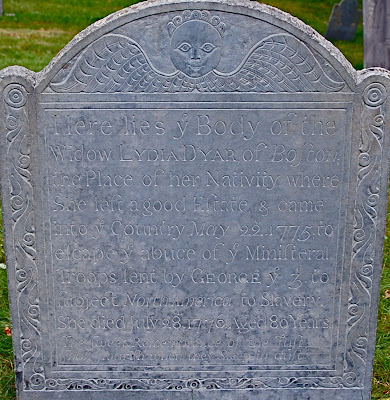 
Here lies ye Body of the
Widow LYDIA DYAR of BOSTON;
the Place of her Nativity where
She left a good Estate & came
into ye Country May 22d. 1775 to
escape ye abuce of ye Ministerial
Troops sent by GEORGE ye 3d to
subject North-America to Slavery.
She died July 28th 1776, Aged 80 Years.
The sweet Remembrance of the Just
shall flourish when they Sleep in dust. 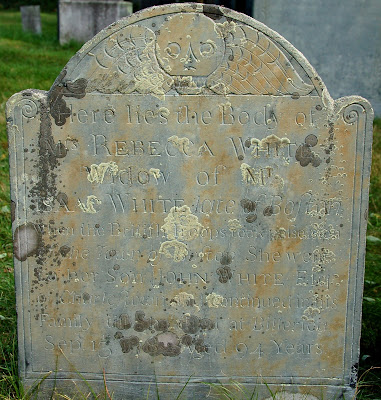 Rebecca White survived until 1782, but her epitaph still referenced her flight from Boston:
Here lies the Body of
Mrs. REBECCA WHITE
Widow of Mr.
ISAAC WHITE late of Boston.
When the British Troops took possession
of the Town of Boston, she went
to her Son JOHN WHITE Esq.
of Charlestown and continued in his
Family 'til She died at Billerica,
Sept. 13th 1782 Aged 94 Years.
See also the Faith Durant stone in Dedham, MA (photo available on A Very Grave Matter):

Here lies buried
the Body of
Miss Faith Durant
Who was driven by the
hand of tyranny from
BOSTON
the place of her Nativity
She departed this life
Octr. 7th Anno 1775
Aged 56
Years.
Thanks to Lori Stokes for pointing me toward this epitaph.
Posted by Caitlin GD Hopkins at 9:25 AM