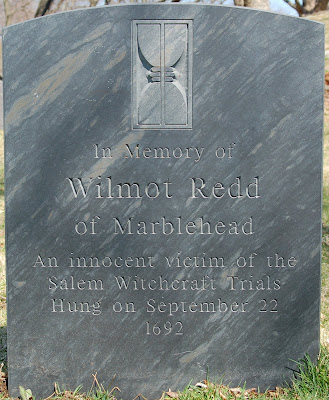 Obviously, this is not a seventeenth-century stone. In 1998, the town of Marblehead, MA erected this gravestone on Old Burial Hill to memorialize a local fisherman's wife, Wilmot Redd, who was executed for witchcraft on September 22, 1692. Redd, an acerbic, impoverished, middle-aged woman, was accused of torturing the young girls of Salem Village. The transcript of her "examination" preserves the frenzy of the courtroom scene:


When this examinant was brought in Mercy Lewis Mary Walcot and Abigail Williams fell into fits. Mercy Lewis said this Woman hath Pincht me a great many time Mary Walcot sais this woman brought the Book to her. Ann Putnam jure Saith she never hurt her, but she hath seen her once upon Mercy Lewis and once upon Mary Walcot the last fast day, Eliz. Hubbard said this Examinant had brought the book to her, and told her she would knock her in the head, if she would not write. Ann Putnam said she brought the Book to her just now. Eliz. Booth fell into a fit, and Mary Walcot and Ann Putnam said it was this woman afflicted her, Susan Sheldon was ordered to go to the examinant but was knockt down before she came to her, and being so carryed to said Redd in a fit, was made well after said Redd had graspt her arm. Eliz. Hubbard dealt with after the same manner. This examinant was bid by the Magistrates to look upon said Hubbard, she the said Hubbard was knoct down. Abig. Williams and John Indian being carried to the examinant in a greivous fit were made well by her grasping their arms. This examinant being often urged what she thought these Persons ailed, would reply, I cannot tell. Then being askt if she did not think they were Bewitched: she answered I cannot tell, And being urged for her opinion in the case. All she would say was: my opinion is they are in a sad condition.

More documents of Redd's trial, including additional testimony against her, can be found here.

New Englanders of the nineteenth century remembered Wilmot Redd in a popular rhyme:

Old Mammy Redd of Marblehead,
Sweet milk could turn to mold in churn.
I could be picky about the hanged vs. hung issue, but I'm trying to reduce stress in my life by learning to let these things go.
Posted by Caitlin GD Hopkins at 7:24 AM