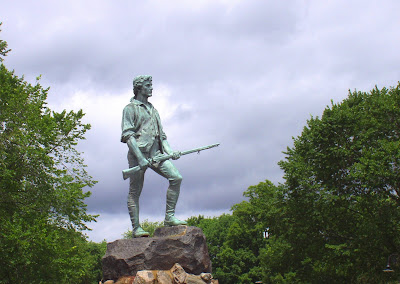 If you live in Massachusetts or Maine, you already know that today is Patriots' Day. I didn't go out to the reenactment, but I did drag Pete over to Cambridge Common on Saturday night to visit the brass horseshoe prints commemorating the ride of William Dawes.

There are several graves in local graveyards dedicated to those killed on April 19, 1775. British Regulars are buried in Lexington, Arlington, and Milk Row Cemetery in Somerville. Minutemen killed during the battle are buried in all over the place — the Jason Russell gravesite in Arlington is one of the most impressive. I find the British soldiers' graves particularly sad. The makeshift marker in Arlington looks so woefully forgotten. In Lexington, some 19th- or 20th-century mourner erected a more permanent memorial, but it's still anonymous and sad: 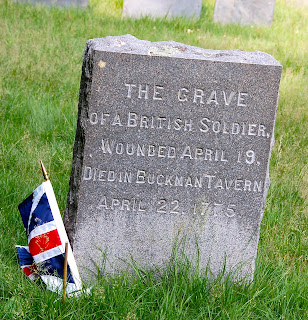 The "Lexington Alarm" was a defining moment in the lives of many New England men. Years later, it was the most memorable moment of their lives. In Brooklyn, CT, Asa Pike's gravestone marks him as one of the many Connecticut men who marched to Massachusetts in the days following the battle. 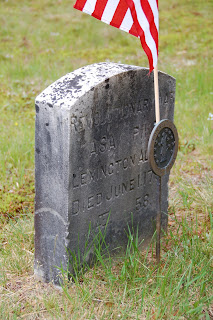 I took the train into Concord yesterday so I could pay a visit to the North Bridge -- I'm one of those annoying people who thinks holidays should be celebrated on the real day, rather than on the nearest Monday. ;-)

One of the most noted markers for the British soldiers is the one right beside the North Bridge where the first of them were killed. Here's an online photo I found, with James Russell Lowell's verse. I understand there is a volunteer organization that keeps overseas British military graves decorated -- I've forgotten the name, but perhaps someone knows. This one always carries a British flag (whenever I've been there), as does the tiny marker next to the sidewalk near Concord center that records another British burial.

And here's the story of the Minuteman, as I wrote it up for some students several years ago.