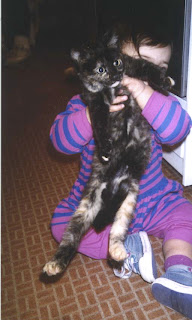 Yesterday, while listening to a radio interview with Michael Schaffer, the author of One Nation Under Dog, I realized that the pets I had as a child had unusual names. Schaffer was talking about how dogs are now named Max, Chloe, and Jackson (popular baby names) instead of Fido and Spot. I nodded along before thinking, hey wait, most of our pets had Civil War names.

Over the years, we had cats named Appomattox, McDowell, Charlemagne, Traveller, Rienze, and a dog named Zouave.

It had honestly never occurred to me that this might not be normal.

Update (4/12/09): I'm home for Easter and my family has informed me that I forgot a pair of kittens — Faugh and Ballaugh. I had a feeling there were more. Faugh and Ballaugh were named after the motto of the 28th Massachusetts: Faugh a Baullagh or Clear the Way.
Posted by Caitlin GD Hopkins at 11:26 PM

.i named my hamster pneumonia lisa...and then i named my two small white mice thelema and louise.

Most of our early pets had simple names, although the Eliot-ish habit of giving a fancy name for special occasions was respected (hence, Graymaulkin Pahws).