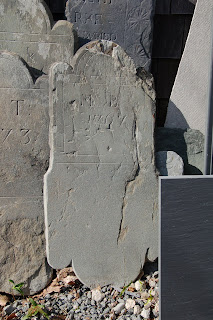 Of the many intriguing gravestones currently in the possesion of the John Stevens shop, this little footstone caught my eye. The carver originally intended to letter the other end of the stone, but he broke off a piece of the corner. Instead of wasting the stone, he merely flipped it over and finished the other side. The blemished stone became ballast.

Ironically, the flawed side, which remained buried for two centuries, is in nearly pristine condition, while the new top is pretty battered.

This reminds me of the recycled stone at Copp's Hill.
Posted by Caitlin GD Hopkins at 9:28 AM