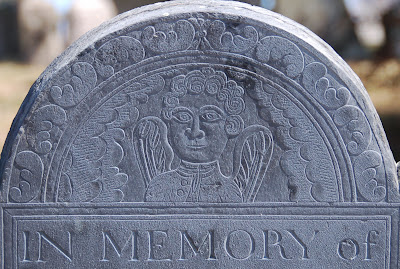 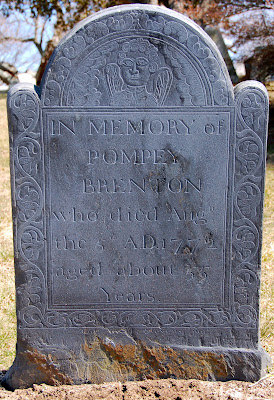 This stone was carved right around the time when John Stevens III started carving in a "typographic" style rather than a "lyric" style (this terminology c/o John Benson at the John Stevens shop). The change was, apparently, related to the arrival of Baskerville type in Newport. According to Mr. Benson, the typeface became wildly popular and captured the attention of John Stevens III, who abandoned the letterforms of his youth in favor of the more regular, ruled letterforms of his post-1772 stones.
I'm not entirely sure I can reliably describe the differences — certainly, I cannot approach Mr. Benson's enthusiasm for the subject — but I can provide an example. 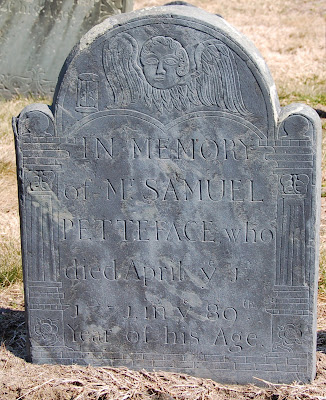 In the Samuel Petteface stone (1771), also carved by John Stevens III, the numeral 1 is very different from the typographic 1 on the Pompey Brenton stone. Mr. Benson also assures me that there is a greater harmony of form between the letters and iconography on the Petteface stone than on the Brenton stone, though my eye is not as discerning on this point.
Posted by Caitlin GD Hopkins at 8:47 AM

I'm quite interested in typography, although I'm no real expert, and I certainly don't have the knack for identifying individual faces that some people have -- it's a bit like having perfect pitch. Where carvers learned their letters is an interesting question.

In looking at these two stones, though, there's very little typographic difference between them that I can see. Yes, the difference that is clear is between the numerals, with the 1 on the second stone being swash-left. That's not uncommon in New England stonecarving as far as I've seen, and I'm not sure there's any pattern to it. (The Stonecutter of Boston used elaborate swash numerals, and the Parks sometimes did also as I recall.) The 7 on the second stone is more bent and has a longer descender also, but you'd need to look at more to see if it was a pattern.

The main difference seems to be that the lettering of the second stone is more condensed and the lettering of the first more extended (terms of art referring to how stretched horizontally they are). This could be significant, but you'd have to look at more examples; carving, like calligraphy and unlike metal type, can be condensed or extended at will as the space requires.

Another minor distinction is that the crosspiece on the E is slightly elevated in the second stone.

The biggest stylistic distinction is surely the borders: the second has an architectural border, while the first has a traditional floral design from the earlier period.

(Just thinking out loud as usual.)

The faces are actually quite different (for classical serif faces). The d, e, a, r, and g in the lowercase letters are the most obvious. Also, the serif style is very different. The face is condensed and has much less contrasty thicks and thins.