1960: The Making of a Mildly Amusing Board Game 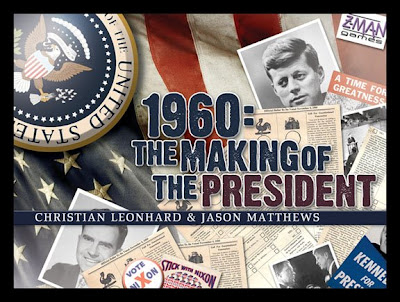 It's been another raucous night of debauchery here in Cambridge —Pete and I spent the evening playing 1960: The Making of the President. My initial reaction: meh.

In this 2-player game, the opponents vie for electoral votes by deploying event cards based on real factors in the 1960 presidential campaign. For example, the Nixon player might play the "Norman Vincent Peale" card to counteract Kennedy's support among Catholics, while the Kennedy player might play the "Nixon's Knee" card to slow down Nixon's campaigning. Players can also gain support by buying advertising, winning endorsements, and spending "campaign points" to position themselves on the major issues (Defense, Economy, Civil Rights). There's even a mini-game to simulate the debates.

Unfortunately, this was a game that added up to less than the sum of its parts. I thoroughly enjoyed reading the event cards and learning tidbits of information about the campaigns, but that was really the best part. The other parts seemed unbalanced — advertising was a pain to buy and ended up netting the buyer very little, positioning on the issues was similarly irrelevant, and the wide swings in support in key states at the end of the game were neither plausible nor particularly interesting. It was very difficult to keep track of the electoral vote count and I spent much of the game wondering if this simulation wouldn't have been better as a video/computer game rather than a board game with 1,000 tiny cubes.

None of those aspects of the game are necessarily fatal flaws, but in the end, it just was not very much fun. I felt no sense of accomplishment or suspense, and the individual maneuvers, while engaging in the sense that they took brainpower, never left me emotionally invested in the outcome.

Sometimes that happens the first time I play a game — I don't know what I'm doing, so I have no strategy, and just end up going through the motions. Usually, though, by the end, I'm excited and want to try again. This game left me indifferent. I'd be willing to play it again, as it will almost certainly be better the second time, but I'm not sure it will become a favorite like Agricola or Nexus Ops. Other people seem to like 1960, so maybe it's just not my cup of tea.

It's easy to joke about it — what? a board game about the 1960 election is not thrilling? shocking! — but I don't necessarily think a game about an election is boring by definition. I, for one, would welcome a Jefferson/Adams boardgame with a mechanic of fearmongering and vicious personal attacks.
Posted by Caitlin GD Hopkins at 12:36 AM