A Visit to the John Stevens Shop 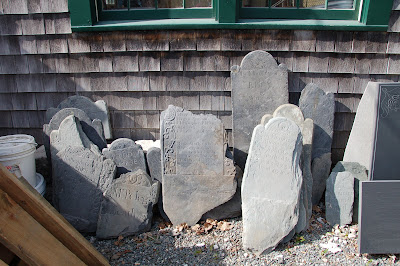 I had a wonderful day today — I passed the afternoon at the John Stevens Shop in Newport. John and Nick Benson were extremely generous — not only did they allow me to look through the unpublished ledgers, they also took the time to walk me through the different carving styles of individual carvers and pointed out the subtleties of letterforms that I, admittedly, had a hard time picking up from Vincent Luti's book.

The ledgers are amazing. Amazing. Some of them are in rough shape, but they are packed with useful and interesting information about commerce in 18th-century Newport. In addition to the records related to gravestone production, there are gems like John Stevens III's "A Memorandum of Hogs, for my own Satesfaction," and accounts of various servants' infractions. John Stevens III actually recorded his children's birthdates (including exact time of birth and weight), marriages, and deaths in the inside cover of his shop ledger as if it were a family Bible.

I found some incredibly useful information about freedmen who commissioned stones for their family members in the 1780s and 1790s.


John also showed me several fallen stones that people have brought to the shop over the years, including two from God's Little Acre. I was especially excited to see this one, which indicates that two slaves owned by Christopher Phillips — Hagar and Lonnon — were siblings: 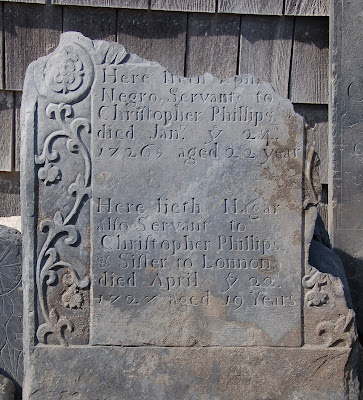