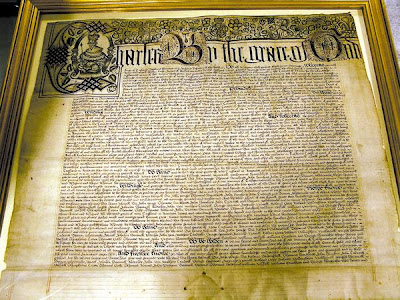 Today, I visited the Massachusetts Archives out by the JFK Library. I had been to the JFK library before, but never to the Archives. I'll definitely be going back — the reading room is crammed with probate records, vital statistics records, and loads of other useful resources.

I was there to see the probate records pertaining to Robert Cuming of Concord, MA. He died in 1754, leaving his entire estate to his wife, Helen, who later divided it among their three grown children, John, Ame, and Elizabeth. John graduated from Harvard, became a respected doctor, and earned the honorific "Colonel" for his service on the Committee of Correspondence during the Revolution. Ame and Elizabeth became shopkeepers in Boston, where they refused to abide by the nonimportation agreements. Eventually, they fled to Canada and were charged with treason in absentia. Oh, to be a fly on the wall at family gatherings.

When I was finished in the reading room, I stopped by the Commonwealth Museum, which is really just a timeline of Massachusetts history aimed at students in grades 4-8. The displays are eye-catching and there are several interactive features, but practically no artifacts. What display cases there are are filled with reproductions of documents, playing cards, quill pens, etc.

I wandered through these exhibits for about five minutes before getting bored and making a beeline for the "Treasures Gallery" at the back of the museum. This darkened chamber holds six priceless artifacts:
Since it is an archive, this is obviously a document-heavy collection, but even I, a lover of material culture, was very impressed. The 1629 charter (pictured above) looks so strangely medieval, and it's always fun to read the original Bill of Rights, in which our First Amendment is really #3.
Posted by Caitlin GD Hopkins at 11:52 PM

See if someone will let you in to look at the Harvard charter of 1650 in Pusey. When I was a grad student it was never on display and I never saw the original -- I don't know if it's still kept in the permanent vault or not. (I did get to go in the vault in Houghton once, though. Not the reading room, not the closed stacks, but the vault. The most notable thing in there was the stack of violin cases.)

I didn’t realize the Cumings sisters had local relatives. Hmmm.

I've been having a lot of trouble tracking down the Cuming sisters' origins.

The probate records I saw yesterday were a big breakthrough — there's a note dated 1753 in Middlesex Probate file #5439 that's signed by Ame, Elizabeth, and John Cuming. The note is attached to Robert Cumings' will and indicates that his three children were satisfied with the terms of the will. I compared the signatures to the signatures in the James Murray Robbins papers at the MHS, and am 99% sure that they match.