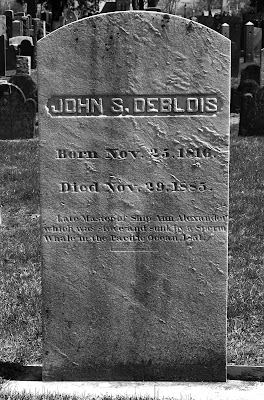 While I was in Newport yesterday, I stumbled across the grave of Capt. John S. Deblois, commander of the famous Ann Alexandra, a whaling ship that was "stove and sunk by a Sperm Whale in the Pacific Ocean, 1851."

The demise of the Ann Alexandra made headline news all over the United States in 1851. Hundreds of newspapers reprinted the Panama Herald's "thrilling account": 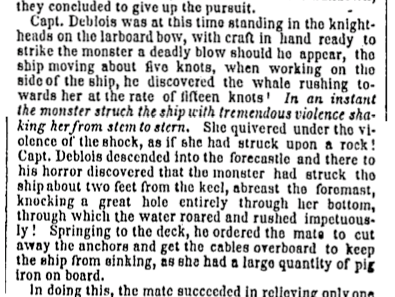 Here's another version if you can't see the New York Times archives.


By coincidence, the first American edition of Melville's Moby Dick hit bookshelves mere days after the story broke. Melville himself commented in awe,


Ye Gods! What a Commentator is this Ann Alexander whale. What he has to say is short & pithy & very much to the point. I wonder if my evil art has raised this monster.

Maybe he should have turned that "evil art" toward raising an audience — Moby Dick sold about 4,000 copies between its publication in 1851 and Melville's death in 1891.

Posted by Caitlin GD Hopkins at 10:03 AM