Seduction Novels in the Graveyard

In the new issue of Common-Place, Lisa Gordis writes about the modern audiences that appreciate early American books. At the end of her article, Gordis discusses a visit to the "Charlotte Temple" gravesite in New York's Trinity Churchyard. Of course, Charlotte Temple is a fictional character, so she isn't really buried under the stone that bears her name, but somebody (probably) is. During the 19th century, the gravesite attracted a steady stream of devoted pilgrims.

There is a similar monument in Peabody, MA dedicated to Elizabeth Whitman, whose tragic death inspired Hannah Webster Foster to write The Coquette. As far as I know, it attracts very few visitors. 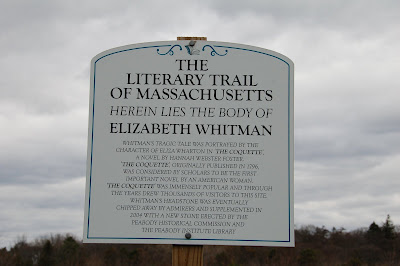 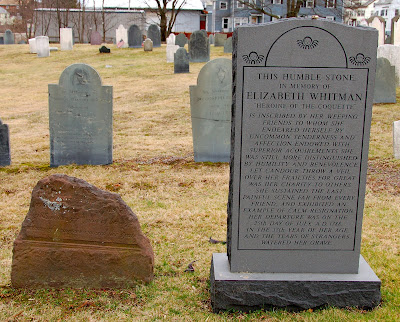 I see that in the modern sign, the word "literary" has a patch over the last 'r', as if it had been misspelled. I wonder if that's the case.

I'm one of the few visitors that has made the trek (though I admit to never having read the novel). If you go, stop by the final resting place of the now-obscure reverend Jones Very - a close friend of Ralph Waldo Emerson, he was more Transcendental than any of the other Transcendentalists. He was a tutor at Harvard until he start proclaiming he was the second coming of Christ. Look him up on Wikipedia - he's fascinating!

Not sure if you noticed it, but the editor's intro to that issue of Common-Place actually has a discussion and photos of the Whitman gravesite.

I've also written about the grave in WMQ (66.2), though you may need access via an institutional subscription.

Great blog! I'll be visiting Whitman's grave again in late August if anyone wants to make it a communal affair.