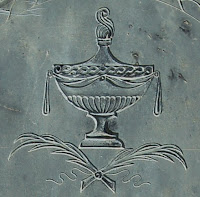 The epitaph of young Samuel Packard of Providence, RI attests to a belief in the angelic innocence of children. Unlike 17th-century Calvinists, who believed in original sin and the innate depravity of all humans, late-18th and 19th-century New Englanders were moving toward a more charitable understanding of human nature. By the early decades of the 19th century, the trope of children as innocent angels borrowed from heaven was commonplace. This idea went hand-in-hand with a domestic ideology that imagined the home (and those who were confined to it) as a haven, safe from the corrupting influences of the world.

Samuel Packard's epitaph extends this idea to its logical conclusion: a child who dies young is innocent of all sin and can expect to go to heaven while sinning adults will be left behind.

Here lies Interred the Body of
SAMUEL PACKARD Junr.
Son of
Capt. Samuel Packard, and
Abigail his Wife: Suddenly
snatch'd by the hand of his
Heavenly Parent, from the evil
of this transitory life, He on
Feby. 25th A.D. 1799 entered the
regions of immortal felicity,
Aged 1 Year, 5 Months & 17 Days.
Beneath a sleeping Infant lies,
To earth his body's lent;
More glorious he'll hereafter be,
Though not more innocent.
When the Arch-angel's trumpet shall blow
And souls to bodies Join,
Millions will wish their lives below
Had been as short as thine. 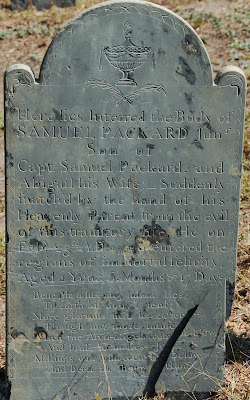 Posted by Caitlin GD Hopkins at 6:14 AM

The "regions of immortal felicity" had a literary quality that made me think of Emily Dickinson. She died in 1883 and so may be outside your timeframe for this series, but her stone in Amherst includes another of the 101 ways you might come across: it says "Born" with a date, and then "Called Back" with the date of death. You can probably find a picture somewhere online.