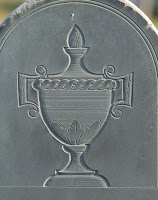 It's true! It's true! Drinking makes you a murderer. Just check out the last line of Freelove Ball's epitaph:

To the Memory of
MRS. FREELOVE BALL,
wife of Elijah Ball,
& daughter of Jonathan
Mitchell of Block Island.
She died April 18, 1836,
from stabs inflicted with a knife,
in her 44th year.
The Mother of nine children
who all lived to deplore the loss
of so excellent a Mother.
Oh! tis a trying thing to be bereft of life
By the vile hand of him who called her wife
And those who read may thus infer from hence
That this rash act sprung from Intemperance!
Elijah Ball was tried for murder and convicted. On, October 1, 1836, the Norfolk Advertiser reported that "the Jury was out only ten minutes," though the Columbia Register says it was 20 minutes. Although Ball was sentenced to death, he petitioned for clemency, and it was granted (via the Newport Mercury): 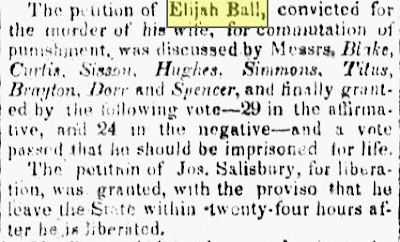 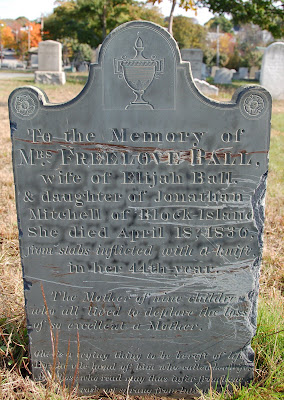 Posted by Caitlin GD Hopkins at 7:42 AM