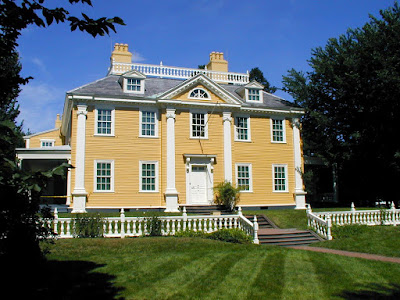 I'm taking a material culture course this semester. Our main assignment is to research an object from the collections of the Longfellow House Museum. In addition to this project, we are reading plenty of articles on museum studies and object-oriented history, as well as books such as Charles C. Calhoun's biography of Longfellow for context. Our first assignment — write a short response detailing our reactions to the house following our first visit:

One of the first objects I noticed in the Longfellow House was a small porcelain cup peeking out from a glass-fronted cabinet in the hall off Fanny Longfellow’s sitting room. The souvenir, which seemed to be a twentieth-century artifact, bore the likeness of a full-bearded, elderly Henry Wadsworth Longfellow, perhaps inspired by Julia Margaret Cameron’s iconic photograph. “What a strange object to have in Longfellow’s own preserved house,” I thought to myself. As our tour through the house progressed and I realized that Castle Craigie is not, in fact, a preserved house, but rather a collection of sacred objects enshrined in a house, the little cup seemed less incongruous. I had thought it discordant because it seemed unlikely that it had been part of the décor during Longfellow’s lifetime, but it is perfectly in keeping with the rest of the house’s collection: venerated objects that bear witness to the home’s great inhabitant(s), their accomplishments, and their social connections, all lovingly and self-consciously preserved by attentive descendants.

What is missing from Castle Craigie is a powerful sense of a lived life. While Charles Calhoun’s biography, Longfellow: A Rediscovered Life (2004), follows the ups and downs of “a man who frequently is miserable and almost always a little depressed,” the exhibits in the house presents Longfellow as emotionally and professionally fulfilled, perpetually surrounded by family, friends, and the dazzling relics of both his own and the nation’s history (Calhoun, 142).  More orthodox tours of the house may draw more attention to the family’s challenges and tragedies, but the objects do not present that story without docent intervention. Even Charley’s souvenirs are petrified reminders of a vibrant life lived elsewhere. If reading a biography is seeing the man in progress, visiting his house is seeing him complete, but inert — one of Audubon’s stuffed birds.

Contributing to this sense of the house as a shrine is the family’s decision to preserve ornamental knick-knacks and historically significant inkwells while discarding (or, at least, not displaying) more prosaic objects. The carriage house is empty of carriages, the children’s bedrooms are destitute of toys, and I did not spot any chamber pots under the beds. The contrast between the dining room and the kitchen is especially striking: the former is fully furnished and seems to be waiting to receive the guests who might be in the next room, while the latter, equipped with a stove marked “1901” and a few scattered pans and dishes, is far from ready to prepare a meal worth serving. The spider used to cook Longfellow’s breakfast is, perhaps, languishing unheralded in a heap of similarly undistinguished cast iron in a junk shop somewhere in Middlesex County.

The point is not that the Longfellow House Museum should aim to replicate Old Sturbridge Village. The choices made by both the Longfellow family and the present curatorial staff have made the house what it is today and, before any work can be done to illuminate individual objects, it is essential to identify the museum’s project and its biases.

My nascent understanding of the museum’s project is that it aspires to the preservation of the house’s “public” spaces (parlors, studies, halls, and other areas accessible to friends and visitors) and objects connected with the legacies of the inhabitants (family portraits, heirlooms, objects related to male family members’ achievements)* . Intimate spaces, such as bedrooms, are preserved, but without the prominence or specificity of interpretation accorded the downstairs rooms. Work spaces where non-domestic and non-literary work was done (kitchen, carriage house, laundry room) are underfurnished and were largely overlooked during our brief tour. These disparities in furnishings and emphasis may be an after-effect of the house’s twentieth-century history as a functioning home in which bedrooms and kitchens may have been substantially modified to accommodate residents. Whether the uneven treatment of different rooms was intentional or incidental, the undeniable effect is that the house is presented as a social and literary space, drawing attention to its occupants’ social and literary activities.

To say that the Longfellow House holds a biased collection does not imply that it is remiss, merely that it is particular, as all collections inevitably are. Because the museum’s collection was self-consciously preserved by the family, it reflects their value judgments about what was worth saving.**  I use the word “preserved” hesitantly, since the process of choosing specific objects over others is a creative, as well as a preservationist process. In addition to the family’s editing, the museum staff has chosen the objects and rooms that will be on display and has added a layer of more explicit interpretation in the form of docent tours. In doing so, they have partially avoided the “petrifying authoritarianism” that Prof. Gaskell identifies as a pitfall of bequests that deny museums the right to edit and reinterpret collections.***  Though I do not know enough about the history of the museum to draw firm conclusions about how the museum staff may have altered the Longfellow family’s vision, this consideration — why is this object here? who put it here and why? where was it before it was here? — will be indispensable to any further work on objects in the collection.

Compared to the house, Calhoun’s biography presented a much more surprising portrait of Longfellow. While any biography has its own authorial and source biases, Calhoun’s project of “rediscovering” Longfellow was successful largely because it took Longfellow and his work seriously instead of facilely dismissing him as the bland mouthpiece of a naïve culture. A first visit to Castle Craigie invites the observer to imagine Longfellow holding court in his sumptuous study or receiving admiring letters from his reverent readers. In contrast, Calhoun’s reader encounters a frustrated man who wrestled with the great problems of American identity and “produce[d] over a long career an alternate vision to the America of the relentless market economy” (Calhoun, xii).  Where the house draws attention to the poet’s (and the family’s) public persona, the biography is more intimate. Calhoun ably investigates Longfellow’s public life, but gives substantial weight to his personal life as well. It is true that Longfellow was not a tortured soul in the mold of Poe. Still, his was not as placid or comfortable a life (or mind) as it might seem. No object I encountered at the Longfellow House made me feel as viscerally connected to Longfellow as the story Calhoun tells of his first wife’s horrific death.****

Barring Charley’s souvenirs and the self-congratulatory porcelain cup, few of the objects at the Longfellow House struck me as unusual or unexpected possessions for a Victorian poet of Longfellow’s pedigree and stature. It is almost certain that this impression will dissolve as I investigate a particular object more fully. Like one of Longfellow’s poems, the furnishings of his house may seem conventional at first, but careful research and attentive interpretation will almost certainly tell a different tale.

The porcelain souvenir cup, like much of the Longfellow House, is a testament to his twentieth-century popularity (and infamy) as the serene, optimistic cultivator of national memory. Our project, like Calhoun’s, is to rediscover Longfellow. By investigating the objects on display and in storage at Castle Craigie, perhaps we will uncover something unexpected, confusing, or uncomfortable about Longfellow and the country he helped to create. Regardless of where our object-based research leads, it is unlikely that we will come away from it with an uncomplicated view of Henry Wadsworth Longfellow.

*It is possible that objects related to female achievements are on display, but were not pointed out to our group. I was especially struck by the absence of materials related to Alice Longfellow’s work at Radcliffe, though their exclusion may have been a choice made by Alice herself.
**All collections are subject to preservation bias in one form or another. Even historical archaeologists like James Deetz find their collections subject to factors such as vandalism and organic decay.
***Ivan Gaskell, “History of Images,” in Peter Burke, ed., New Perspectives on Historical Writing, 2nd edition (Oxford: Polity, 2001), 181.
****Calhoun, 114-118. Fanny Longfellow’s death was also appalling, but Mary’s death impressed me as uncommonly tragic, perhaps because of Calhoun’s suggestion that Henry felt personally responsible.
Posted by Caitlin GD Hopkins at 2:33 PM