Henrietta and John Hardy Spurr of Providence, RI have matching gravestones at North Burial Ground. Although "existence terminated" sounded jarring to me at first, the verses attest to the Spurrs' conventional faith in eternal life. Mrs. Spurr's inscription is the first verse of James Montgomery's hymn, "There Is a Calm for Those Who Weep (or The Grave)" (1805):

There is a calm for those who weep,
A rest for weary pilgrims found;
They safely lie and sweetly sleep,
Low in the ground.

Mr. Spurr's seems to be an original composition:

To worldly views his lofty soul was blind,
Immortal visions occupied his mind;
Truth lent her mirror, faith her stedfast cross,
And pious rapture all his soul engrossed. 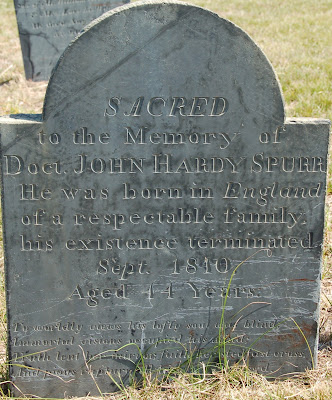 Posted by Caitlin GD Hopkins at 6:58 AM